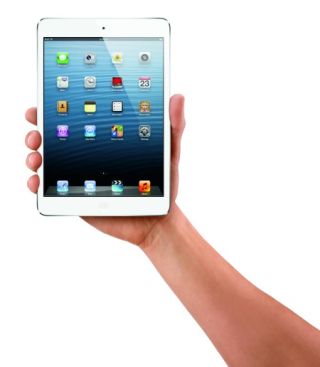 The Apple iPad Mini is official. The rumours were right and now we have what Steve Jobs said would never happen – a smaller form factor iPad.

We will have a full iPad mini review just as soon as we can get our hands on one for an extended period but here's a round-up of some journalists' first impressions.

Will Findlater, editor of our sister title Stuff.tv, reserved judgement, wondering “how suited the iPad Mini is to running apps with complex interfaces, the jury will remain out [on] until we can get a sample to stick our favourites on.”

Despite the smaller screen T3’s Luke Peters observed how consistent the experience was compared to its larger brother, “colours are vivid, text is pin sharp, web pages render quickly and, because there's almost a 4:3 ratio going on, you get a lot of content on page.”

Signifying Apple’s intent to compete with the Amazon Kindle and the Google Nexus 7, PocketLint’s Stuart Miles stated that, “at just over 308g, it's considerably lighter than a conventional iPad, thanks mainly to using much less glass in its construction - and that means you're going to enjoy reading books on it a lot better too.”

TechRadar commented that the size and feel “makes it even better as an e-reader than the larger iPad models, since you can hold the iPad Mini in one hand for much longer before feeling fatigued.”

Shane Richmond at The Telegraph had this to say on the iPad Mini’s price. “At £269 for the 16GB, Wi-Fi-only model, there will be plenty who feel that the iPad mini is too expensive. The 16GB Google Nexus 7, for example, is £70 cheaper at £199.”

Concerning the last generation A5 processor that powers the Mini, Wired’s Christina Bonnington noticed that “it runs iOS 6 and has enough power to get the 3-D maps capability, but pinching and zooming was choppier and more stuttery than I’ve experienced on any other iOS device. “

Apple knows how to make a scene

Finally, Joshua Topolsky at respected US site The Verge enthused that, “it's an impressive device that helps to remind the industry just how very good Apple is at two things: creating gorgeous hardware, and creating a spectacle.”

We certainly can't wait to get our hands on one and give the iPad Mini the thorough whathifi.com review treatment.

Already convinced? Pre-orders start this Friday October 26 with the iPad Mini set to ship and be in stores from 8am on November 2 (WiFi-only). Wi-Fi and Cellular models will be available in late November.

Full details on the iPad Mini