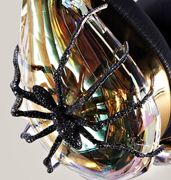 It's all happening down at Harrods in London today: not only is it the UK launch of LG's £10,000, 55in OLED TV, but Monster is unveiling its Diamond Tears Sally Sohn Edition headphones.

So what, you may ask? Well, they cost an eye-watering £20,000 a pair. Yes, you read that correctly - £20k! They're made from 18k gold and encrusted with black diamonds – you can't get much more bling than that.

Monster collaborated with Korean artist and jewellery designer Sally Sohn on the creation of the Diamond Tears headphones, which incorporate Pure Monster Sound technology. They were tuned by Head Monster Noel Lee.

Also available are the special gold Diamond Tears heapdhones (below), which have been made in a limited edition of just five pairs.

Harrods also has an exclusive on the new White and Black Tuxedo Monster DNA headphones, created in alliance with Viacom.

Noel Lee says: "The creation of the Diamond Tears Sally Sohn Edition was truly a labour of love for us, and being able to work with such a talented, ahead-of-the-curve designer as Sally to create such a special, museum-quality work of art was really the icing on the cake."