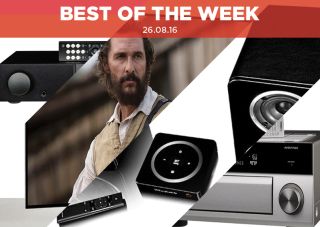 This week Wharfedale officially confirmed its Diamond Active range of bookshelf and floorstanding speakers, Onkyo stepped up its commitment to hi-res audio with two new network players and a compact stereo system. Also, Spotify announced new subscriber figures that put it way ahead of Apple Music.

For reviews, we tested the OLED55B6V TV from LG, the RX-A3060 cinema amp from Yamaha and Naim's NAC-N 272 streamer/preamp.

Wharfedale's new A1 and A2 Diamond Active speakers are a little different from your usual powered speaker. Signals are transmitted via a hub (dubbed the H1), removing the need for a physical connection and allowing the speakers to be placed anywhere in a room. The A1 bookshelf (£600) and A2 floorstander (£1000) both go on sale in October.

To celebrate its 70th anniversary, Onkyo will release two hi-res network players (NS-6130 and NS-6170) in September, with a hi-res compact stereo system to follow in October. Expect the usual suite of streaming features, with Onkyo improving the DACs in all three products for a better sound performance.

Despite increased competition, music streaming service Spotify continues to grow, with confirmation that it has 39 million paying subscribers. That figure is around a third of its overall userbase (an estimated 125 million), and double the number currently paying for its nearest rival Apple Music.

Watch how disused bridges in the US are turned into turntables

No, the Xbox One S doesn’t support 4K pass-through

Now you can have a levitating speaker system

We love what LG has done with its OLED sets, but price was always a factor. While the OLED55B6V is hardly a snip at £2700, it is LG's most affordable effort so far. The picture performance is sublime, with OLED's deep blacks and great colour balance stealing the show. This TV is a real treat.

Yamaha continues its recent form with a wonderfully talented amplifier. Full of dynamism, control and power, this surround amp elevates any cinematic experience into a great one. It's not cheap, but the performance is one of supreme quality.

Naim's NAC-N 272 offers an absolutely stunning performance. Functioning as a streaming preamp, the N 272's best virtue is an insightful and organised sound that's lovely to listen to. Despite what the price may indicate, this unit is something of a bargain.