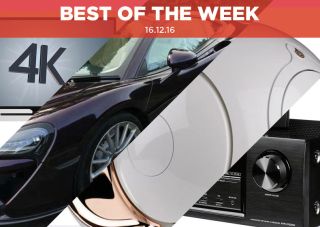 The January 2017 issue of What Hi-Fi? is out now. Inside you'll find reviews of budget projectors, a feature on how to build a hi-fi system and the latest news and opinions from the world of hi-fi and home cinema.

MORE: 40th anniversary giveaway: £20k of prizes are on their way to 42 winners

British Gas has predicted that energy bills will rise thanks to 4K TVs.

The format is currently gaining in popularity, but analysts claim that 4K TVs use up to a third more energy than their HD counterparts.

If you have one, it might be wise to check how energy efficient it is - it may be costing you more than you think.

CES 2017 - the consumer electronics show in Las Vegas - is just round the corner, and rumours suggest we may see LG's first 4K Ultra HD Blu-ray player there.

The listing was spotted on the database of the Wi-Fi Alliance organisation and could be called 'LG UP970'.

We'll be reporting live from CES and will let you know if we spot it.

The Grand Tour is the most pirated TV programme in history

The Grand Tour, Amazon's exclusive TV show and successor to Top Gear, has become the most illegally downloaded TV programme in history.

After the first three episodes, the series had been pirated a staggering total of 18.9m times.

MORE: The Grand Tour is the most pirated TV programme in history

You can now get Dolby Atmos on your Xbox One

Apple's AirPods are on sale now

Spotify wants to give on-demand features to non-paying customers

The best What Hi-Fi? deals of the month - December

9 of the best gift ideas for kids

Devialet's Phantom speaker series is undeniably attractive and the Gold Phantom is no let down in that respect.

Looking like a prop from Kubrick's 2001, little has changed in terms of build. However, it has a few improvements under the hood.

The sound is impressive, though it could use greater separation in terms of its delivery.

Yamaha's new micro-system features MusicCast and it works like a treat.

MusicCast expands the micro-system's horizons, but it's not quite as adept as its rivals when it comes to sound.

While it offers detailed, musical performance, in terms of dynamics and organisation there are better out there.

The X1300W's bigger sibling the X2300W was a recent Award-winner. With so many similarities between the two models, could it be as good?

Alas, it's not. Though the features are similar, the X1300W can't quite plug the gap in performance. It has Dolby Atmos and a big, weighty, articulate sound, but lacks the power, authority and scale of the X2300W.

However, it is cheaper - so if you're on a tight budget you could certainly do worse than this talented effort.