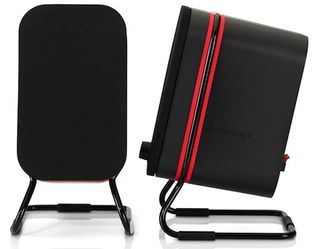 The Audyssey Lower East Side Media speakers may be tiny, but they can kick up a storm...

Just occasionally products slip through the WHFSV review net: we only have so many pages each month, and the competition for space can get fierce.

The Audyssey Lower East Side Media Speakers are a case in point, which is a shame – they're a riot!

Announced last summer, the Audyssey LES speakers were only the second stereo product from a company perhaps better known for its home cinema amp equalisation and set-up software, and having written the initial news story for this site, I was intrigued enough by the little speakers to request a review pair when available.

Time passed, and then not so long ago a box arrived out of the blue from Audyssey, containing a pair of the speakers. In the meantime they'd also appeared for sale here in the UK, through outlets including the Apple Store and Amazon.

Time to set them up and give them a blast, then.

And 'a blast' just about sums them up: designed for use on desktops or in small rooms, as explained in Audyssey's promotional video, these little speakers stand just 23cm tall on their integrated 'lean back' stands, yet deliver a big, big sound with pretty scary bass for their size.

That's all down to a combination of Audyssey's Dynamic EQ, which compensates for loss of detail at low listening levels, Bass XT to monitor the incoming signal and adjust the sound to make the most of the bass driver's abilities.

Oh, and a 7.5cm bass unit in each speaker, backed up with a rear-mounted 10cm passive bass radiator, seen above.

Hook-up is via either a 3.5mm stereo analogue input or an optical digital in, while there's also a headphone output on the front of the 'master speaker'. This also contains the amplification, volume/power control and input for the mains adapter.

Now strange though all that talk about loft living, hip neighbourhoods and favorite bass lines shaking the walls' may make it sound, I've actually been listening to the Audyssey speakers as part of the testing for a forthcoming issue of Gramophone, and that magazine's Listening Wirelessly website feature.

Yes, I know the LES speakers aren't actually wireless, but they fit the wider brief of a 'guide to computer-stored music, from downloading and ripping to streaming and playback' – and what's more they sound seriously good when parked either side of the iMac on our home office desk and fed digitally.

Given the description of low-end-extending technology and passive radiators, you might expect the Audysseys to be all about more bass – they're not. They're all about better bass, allied to a crisp, clean midband and treble from the 19mm tweeter also lurking behind that black grille.

True, the sound is ever so slightly larger than life, but this always makes for an interesting listen, whether with simple instrumental music or something big and orchestral, and of course when I doff the Gramophone hat and spin some rock or pop through the little speakers they make just as much sense.

Play a big, thundering recording such as the new Springsteen set and these speakers really can shift some air, while there's plenty of zing and excitement in the treble hen required, without things ever becoming tiresome.

One thing's for sure – you're unlikely to be hankering for a small subwoofer to stick under your desk if the Audysseys are your office companion.

But it's when you kick back with something more easygoing, such as last year's Listen to Me Buddy Holly tribute album, it's hard not to like the vitality and substance of the sound – it's a very easy listen through these speakers. Well, apart from the Eric Idle track, of course...

And yes, the Audysseys do have enough oomph to fill modest-sized rooms, meaning they're not just for those who listen with their nose pressed to the computer screen.

I've had a few good desktop-type speakers through these doors of late, from the Focal XS Book and SoundScience QSB to the amazing Neat Iotas – the little Audyssey Lower East Side Media Speakers, complete with their red 'go faster' stripes, are firmly on the same 'interesting' list.