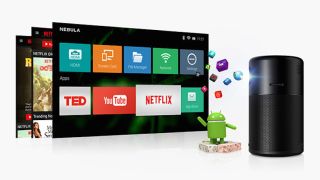 The first tin can was invented by Frenchman Philippe de Girard, and patented in 1810. But now, 207 years later, canned goods have reached their pinnacle: cinema in a can.

Called the 'Nebula Capsule', and currently being funded on Indiegogo, this piece of kit is a 12cm tall projector that can output a 854x480 resolution image - although with recorded brightness of only 100 lumens, you'll probably need to turn off a lot of lights to get the full experience.

On the inside, the Nebula Capsule runs Android 7.0 Nougat, so will be able to stream Netflix, YouTube and BBC iPlayer as well as every other app on Google's Play store - as long as you don't exceed its 8GB internal memory. It also has AirPlay, Miracast and wifi connectivity as well as an HDMI 1.4 port.

Sound-wise, it acts as a 5W 360-degree speaker with Bluetooth 4.0 support - so you can stream your music to it (and hopefully it won't sound too tinny! Do you see what we did there?)

Battery life clocks in at a claimed 2.5 hours of continuous video or 40 hours of non-stop music, so while you can't use it for a Lord of the Rings marathon it should last you through most movies.

The soda-sized projector comes from Anker, the company behind the Zolo Liberty+ wireless headphones - which proved very popular to the crowdfunding market.