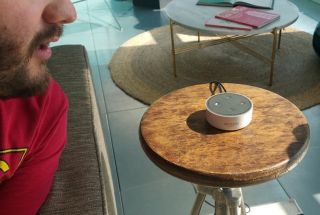 If you’ve watched the Iron Man movies, you’re probably acquainted with Jarvis, the intelligent system that organises the missions of billionaire Tony Stark. But the technology is no longer only on the big-screen. Voice assistants are a reality, offering an ever-increasing number of functions, from reading the latest news headlines to playing music and answering questions.

The likes of Apple’s Siri, Microsoft’s Cortana and Google’s Voice Assistant initially began appearing in smartphones, tablets and computers. However, driven by Amazon’s Alexa - and Amazon’s apparent desire to corner the voice control hardware market - the technology is set to arrive on your audio and video products.

We take a look at the Alexa skills that could soon be helping you control your music, movies and more...

1. Control speakers with your voice

The way you control speakers hadn’t changed much over the years. But the recent arrival of smart speakers that support personal assistants such as Alexa, following the launch of the Amazon Echo speaker and Echo Dot, mean you can now control your music with your voice. And it's rapidly becoming a standard feature.

At CES 2017, Lenovo launched the Smart Assistant speaker, which aims to combine the power of Alexa and the sound quality of Harman Kardon. Arcam is taking a stab too, with the rPlay DAC. With this device, you’ll be able to bring Alexa support to almost any audio system.

Sonos has confirmed it will be offering Alexa support this year, and the Session and Note Bluetooth speakers from Jam also use Amazon's AI.

Alexa seems to be the hot option right now, but Harman Kardon plans to bring out a Cortana-powered speaker this year, and the Google Home speaker should soon arrive in the UK.

Artificial intelligence technology could also transform the television. Forget about finding the remote, you’ll be able to switch channels, and much more, with your voice. LG, Samsung and others have previously launched voice control remotes but voice assistants should add a whole extra level of functionality.

At CES, US manufacturers Element, Westinghouse and Seiki unveiled a range of Alexa-based 4K TVs in partnership with Amazon. The TVs are available in 43, 50, 55 and 65in models, with HDMI inputs, quad-core processors, wi-fi connectivity and UHD resolution screens. All come with Fire TV and Alexa built in, meaning there’s no need for boxes, speakers and complex remotes.

Shouting at your TV may seem odd, but there’s now a legitimate reason to do so.

3. Headphones that are always listening

There’s nothing more annoying than trying to control your headphones while you’re preoccupied with a task. But with AI-powered models, multi-tasking will suddenly become a whole lot easier.

Hardware developer Sensory recently announced that it’s bringing its VoiceGenie Alexa technology to Bluetooth headphones. The company is responsible for the Samsung Galaxy always listening feature, so it has experience in this area.

American tech start-up OnVocal has already brought Alexa headphones to the market. With them, you can use your voice to play music, order shopping and stay up-to-date with the news. Another nifty feature is that you can switch between calls and music without having to touch your handset. They retail for $400 (£300).

Jabra also has a range of voice-controlled headphones, using Microsoft Cortana. And lest we forget, there are the Apple AirPods, complete with Siri, which bring Apple's assistant to your ears.

It's not just inside your home, voice assistants are making their way to the world of motoring, too. It’s a bad idea to use your phone at the wheel, so artificial intelligence systems could pave the way for safer and more convenient driving.

Ford has just formed a partnership with Amazon to deliver Alexa in its cars. From January 2017, owners of Focus Electric, Fusion Energi and C-MAX Energi vehicles will be able to start their engines and lock and unlock doors through Alexa. Volkswagen also plans to offer Alexa support, which could spur more car manufacturers into doing the same.

Microsoft is also eyeing up the connected car market. The company has plans to integrate Cortana into new car models this year. Nissan and BMW are both looking to add support for the smart assistant. And it's possible to use Siri with Apple’s CarPlay connected car software, while for Google fans there's Android Auto.

5. New modes of communication and security

Video conferencing devices are far from new, but intelligent services such as Alexa could mean big changes for everyday communication.

The Nucleus intercom device allows you to communicate with your family easily, whether you’re in your house or outside.

Around the size of a tablet, the Nucleus sports an 8-inch touchscreen and an HD camera, as well as Alexa integration, with which you can play music, use popular apps and control third-party devices.

6. Turn your kitchen into an entertainment centre

Why can't the kitchen be an entertainment hub too? Showcased at CES, LG’s new smart refrigerator is a perfect example of how this could happen.

Offering Alexa and WebOS integration as well as a 29in front touchscreen, you can browse recipes, play music and shop online. You’ll be able to use the fridge to control other smart devices as well. We'll just need to get over the idea of talking to our fridges...

Logitech’s Harmony line has been one of the most popular remote control systems for many years. The company's physical remote and software platform, which already controls devices such as TVs, cable boxes, game consoles, smart locks and smart lights, is now looking to add Alexa support.

This is another way to bring the voice assistant to your home cinema system and other smart home devices. Support is already available in the US, and will be coming to the UK later this year.

Gaming diehards will be happy to learn that voice-controlled games could be on the horizon, too. If you’ve got an Xbox One or PS4, you're already able to control it with voice commands. But we can go further...

Last summer, Amazon unveiled a set of tools to let developers create games that can be controlled with Alexa. These tools are mainly concept-based, but it’s pretty cool to think that you may soon be able to add voice control to games. Knightmare, eat your heart out...