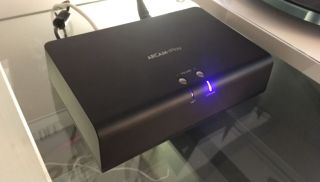 It uses DTS PlayFi, Apple Airplay and UPnP (Universal Plug and Play) to stream content to your system.

DTS PlayFi supports high-resolution audio up to 24-bit/192kHz from a wired network and enables lossless multi-room wireless audio streaming from services such as Spotify, Tidal, Qobuz, Deezer, Pandora and Amazon Prime. And if that isn't enough choice for you, then there are thousands of internet radio stations to choose from as well.

DTS PlayFi has another trick up its sleeve: it will soon be compatible with Alexa, Amazon's voice control assistant, so owners will be able to use an Amazon Echo, Dot or Fire TV to control music via the rPlay.

Arcam's familiar die-cast aluminium casework means the rPlay should survive a few knocks and scrapes, and high-quality audio circuitry is used throughout.

There's a choice of control options: either the DTS PlayFi app for iOS and Android, or the Arcam MusicLife app for UPnP music streaming from a PC/Mac or NAS drive.

Connection to your home network can be wireless 802.11b/g/n or wired via ethernet.

Although the rPlay has its own built-in 24/192 DAC there's also a SPDIF digital output if you want to hook it up to an ecternal DAC.