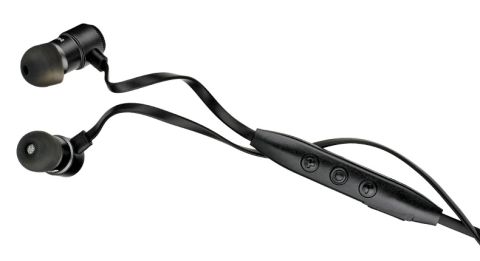 Already a fine pair of headphones, at this new price they're a serious steal

The Beyerdynamic Byron earphones have been the best budget in-ears around for a little while now. The Beyerdynamic Byron BT are the wireless version and, thanks to a controlled, well-defined sound and a new, lower price tag (down from £90 to £60), they comfortably merit an equally solid, five-star recommendation.

The Beyerdynamic Byron BT are normal, wireless headphones. They’re not truly wireless earbuds like the Apple AirPods, and don’t use a chunky neckband like the Sennheiser Momentum In-ear Wireless. Instead, a cable joins up the two earpieces, but they're nevertheless very slight - only a remote housing bulks up the cable, and that weighs just a few grams.

And don’t assume that just because their names are almost identical the Byron and Byron BTs are twins. The Beyerdynamic Byron BT earpieces are aluminium and feel like they could take some rough treatment. There are also magnets on the back of each, making them stick together around your neck when not in use, like a tiny little gadget scarf.

If you want a more secure fit, perhaps for running, you can attach a little in-ear hook as well as a pair of silicone tips. This is just an extra bit of rubbery scaffolding to avoid you accidentally pulling the pair out. Four pairs of tips are included, as well as a simple pouch. Beyerdynamic hasn’t piled too much of the budget into accessories.

The tech features focus on sound quality rather than fluff, too. There’s no NFC and the Bluetooth chipset is a 4.1 model rather than the newer 4.2 kind, but there is aptX, the higher-quality codec. Beyerdynamic also makes a Bluetooth 4.2 alternative pair called the Byron BTA, but the price is far higher at £150.

Given the Beyerdynamic Byron BTs are fairly slight outside of the inoffensive extended earpieces, the 7.5 hours battery life is impressive. You recharge them using the microUSB port on the remote housing, which is covered by a little rubber flap when not in use.

The sound of the Beyerdynamic Byron BT is a little more ambitious than the wired Byron. Where the wired version is somewhat similar to the sound of the SoundMagic E10, with great detail for its price, the Byron BT are brighter.

Bass has been tamed a little without throwing away any impact, and the presence of the upper mids and highs are significantly more pronounced. Its definition is increased, but they can also sound a little more brittle with certain tunes.

But the treble is not flat-out harsh or excessively sibilant, but there’s a certain subtlety missing from the wireless Byrons that won’t please everyone. A focus on the higher mids makes vocals appear forward and give them a slightly cooler tone. It's fair to say the Beyerdynamic Byron BT earphones are less of a safe bet if you are particularly sensitive to peaks in the treble and high mids.

This is no great surprise for a wireless earphone, however. There is always a sonic sacrifice for the wireless convenience - especially at this price - and we're more than happy that the sound quality is more than good enough for the new, lower price.

The Beyerdynamic Byron BTs are very ambitious wireless earphones, attempting to level-up the sound of the standard Byron pair with better-controlled bass and significantly increased definition. And ultimately, they deliver on that promise - especially at this price.

How to avoid buying fake headphones