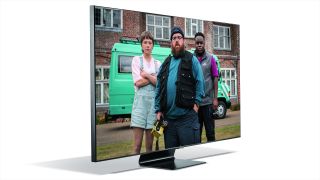 The LG is arguably the star performer in the firm's 2020 OLED TV range, and an astonishingly capable all-rounder to boot. The Samsung, meanwhile, is the tech giant's top 4K performer in its 2020 TV line-up and capable of a seriously punchy picture. So, two cutting-edge 55in sets – but which is the best TV?

If you're having trouble deciding between these top-notch televisions, we're here to help. They might look similar at first glance but there are plenty of pros and cons when it comes to picture quality, features, audio performance, build quality, connectivity, controls, price and more besides.

Read on as we pit two of our favourite TVs against each other, in the AV equivalent of a heavyweight boxing bout, to decide which is the best TV. Cue the walk on music...

It's a very close call but if you want the most affordable option right now, seek out the Samsung.

The LG OLED55CX is just 6mm thick in some places but it has an enclosure to the rear that houses speakers and connections, taking the overall depth of the set to around 4.7cm. It comes with classy pedestal stand but it sits rather low and doesn't leave much room for a soundbar.

Samsung's Q90T doesn't have a super-thin section as it uses a QLED, rather than an OLED panel (more on that later). It's roughly 3.5cm thick almost from edge-to-edge and comes supplied with an iMac-like pedestal stand that leaves a nice gap for adding a soundbar. Wall-mounters who opt for Samsung's No-Gap Wall Mount (£129) will find that the Q90T’s thick, straight edges make it look like a picture frame (the TV even displays digital artwork when in 'Ambient Mode').

The Samsung comes with a black plastic remote. It's not as stylish as the silver version that comes with the pricier Samsung Q95T, but it’s just as pleasant to use and features three dedicated streaming shortcut buttons (Netflix, Amazon Prime Video and Rakuten). The LG is supplied with LG's latest Magic Remote, which features a clever point-and-click function  that works a bit like a computer mouse for your screen.

*Winner* Draw – both designs have their plus points.

If you're splashing out on a premium 4K TV, you'll likely want to do it justice by watching the best-quality HDR content. However, whereas the LG supports an HDR format called Dolby Vision, Samsung champions its own HDR format, HDR10+. Knowing the difference could shape your buying decision...

While Dolby Vision has found its way onto 4K Blu-rays, Netflix, Amazon Prime Video, Disney+ and Apple TV+, HDR10+ content can currently be found on Amazon, Rakuten, a number of 4K discs and Google Play Movies. In other words, it's worth considering which of these TVs will help you to make the most of your preferred streaming service.

As for gaming, both these sets support HDMI 2.1 (albeit in an unofficial capacity in the case of the Samsung). That technology enables gamer-centric features such as eARC (Enhanced Audio Return Channel), HFR (High Frame Rate), ALLM (Auto Low Latency Mode), and all current formats of VRR (Variable Refresh Rate). In short, both these TVs would be the perfect partners for a next-gen 4K console such as the PS5 or Xbox Series X.

Samsung's next-gen Tizen OS is one of the smoothest operating systems in the business and features a comprehensive line-up of streaming apps. You get Netflix, Amazon Prime Video, Disney+, Apple TV, Rakuten and Google Play Movies & TV, all in 4K and HDR. Now TV and BT Sport are also onboard.

LG's webOS operating system isn't quite as slick as Samsung's Tizen but it's still a pleasure to use, especially in conjunction with LG's Magic Remote. The LG OLED55CX boasts a strong selection of built-in apps, including Netflix, Amazon Prime Video, Apple TV and Disney+, complete with Dolby Vision and Dolby Atmos where available. You also get Google Play Movies & TV. That said, while users in the US get Hulu and Vudu, the Vimeo app is missing.

Samsung's TV remote has a built-in microphone that can be used to access Alexa or Samsung’s Bixby voice assistant. It allows for direct control of the TV itself and you can can even turn the set on using your voice, as long as the remote is nearby. The LG has some of its own tricks up its sleeve, including Sports Tracking, which automatically alerts you when you favourite team features in a live broadcast.

Finally, while both TVs have four HDMI sockets and three USB ports, the LG has a traditional headphone socket whereas the Samsung doesn't (you have to use wireless headphones).

*Winner* Draw – both these 2020 models are stacked with premium features, so it really depends which appeal to you the most.

Both of these TVs use cutting-edge upscaling techniques to polish up their picture and deliver crisp, colourful images. But while the Samsung TV is fitted with a QLED panel, the LG TV sports an OLED panel. Here's what that alphabet soup means for you, the consumer...

LG is the world leader in making OLED TV panels. They emit light on a pixel by pixel basis, which means a white LED can appear next to a black one, or a totally different colour, with neither impacting the other. The result is that the OLED55CX serves up stunning levels of contrast and ultra-deep blacks. The picture is sharp and detailed without ever giving the sense of over-enhancement, and colours are bright and vivid when they need to be. Sports fan? The set’s native handling of motion is superb.

So, how does Samsung's QLED TV measure up? Well, the pixels in a QLED panel appear to emit their own light but that's not quite the case. Instead, they simply have the light from a backlight passed through them in just the same way that an LCD layer does on standard LCD/LED TV. The upshot is that you don't get the same deep blacks as you do with LG's OLED panels. What you do get from Samsung's QE55Q90T, however, is a TV that's vastly brighter than its OLED rivals. In most scenes, the image pops from the screen with a vibrancy and punch that the LG can't quite match.

Overall, both these 55in TVs deliver outstanding picture quality but while Samsung's QLED panel has exceptional black depth and viewing angles for a backlit TV, it’s still not quite as good an all-rounder as the outstanding LG OLED55CX. But it's very close and will almost depend on personal preference.

Samsung has taken a big step forward this year in terms of sound. As such, the Q90T sports an eight-driver system and what Samsung refers to as ‘Object Tracking Sound’, which claims to produce a more spacious sound. Bass is certainly weighty and, thankfully, without any of the forced, inauthentic boom you sometimes get with TVs that are trying to sound 'big'. The midrange is clear and natural in tone, while the treble is rounded off enough to avoid harshness. For a 55in set, it's an impressive performance.

The LG CX boasts a 2.2-channel, 40W sound system plus LG's AI Sound Pro technology, which "provides the optimal sound or Virtual 5.1 surround", depending on the watching genre. Overall, this TV serves up very respectable sonics for the money; there’s a decent level of clarity to dialogue and effects, while the Dolby Atmos mode creates quite a large and spacious soundstage. By the standards of the class, it's a punchy and dynamic performance.

Of course, the sound of both these TVs could be easily improved by adding a dedicated sound system. Both are worthy of a full surround sound system if you have the space and budget, but even a relatively affordable soundbar, such as the Award-winning Sonos Beam (£399, $399, AU$599), will provide a significant boost in audio performance.

We rate both these 55in TVs at five stars, so which is the best 4K TV? It really depends on your priorities...

The LG is a superlative performer that offers more dark detail, richer colours and better motion. It supports the popular Dolby Vision HDR format, too. As for the downsides, some may find that the included stand won't accommodate their chosen soundbar. That's really the extent of our gripes, though. If it's within budget the 55in OLED55CX could be the best 4K TV for you.

On the other hand, Samsung's QE55Q90T provides a punchier picture and some of the deepest blacks we've ever seen on a QLED TV. And while the LG has the edge when it comes to picture quality, Samsung offers a slicker operating system, arguably an even better range of streaming apps and a decent set built-in speakers for the money. Plus, it's a little cheaper than the LG OLED55CX and arguably the best pound-for-pound performer here.

Of course, as a look at our round-up of the best 55-inch TVs will reveal, there are also new contenders to consider...

Which 2020 Samsung QLED TV should you buy?