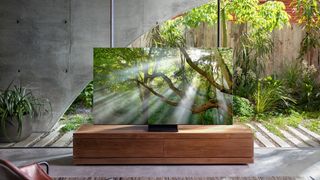 Samsung has fingers in many different tech pies, but like its smartphones, tablets and fridges, its TVs are among the best you can buy, and its QLED sets are the best that it makes.

QLED stands for Quantum-dot Light-Emitting Diode. It's Samsung's rival to the OLED tech that currently dominates high-end TVs. Unlike OLEDs, a QLED TV does rely on a backlight, but instead of the light shining through an LCD panel, it shines through a quantum dot panel. Broadly speaking, the promise of QLED technology is a brighter, more vibrant picture performance than you get from either OLED or LCD TVs.

So what should you consider when choosing a 2020 Samsung QLED TV?

One of the first considerations is whether you want 8K. 8K is a very nascent technology, and a long way off becoming mainstream (4K still isn't exactly mainstream, remember), so most people will get by just fine without it. But if you do want to search out 8K content, or just want to future-proof your set for when 8K truly arrives, by all means spend the extra on one of Samsung's 8K models. According to Samsung, demand for 8K exceeded expectations last year, so clearly some people are jumping on the bandwagon early.

Then there's screen size. Samsung being Samsung, it offers QLED TVs in 75in, 82in, 85in and even 98in sizes. So if you want a TV the size of a wall, Samsung has you covered.

Of course, most people will go for the more reasonable 49in, 55in or 65in TVs. And if you're looking for a smaller set for a more modest lounge or bedroom, there's also a 43in QLED on offer. Obviously these smaller sets are more affordable, too.

Lastly, do you want a lifestyle TV? Samsung has a trio of lifestyle sets that also use its QLED tech – these are called The Frame, The Sero and The Serif. The Sero can be rotated to portrait orientation like a smartphone, The Frame resembles a frame for a work of art (and can display art images on its screen when not in use), while The Serif comprises a TV design in the subtle shape of a capital 'I' sat stop a pedestal-like stand.

Whichever Samsung you choose, you'll get the same, excellent operating system that's more jam-packed with apps than any rival, a stylish design and an excellent remote control. What you get by going further up the range is a better, brighter backlight (entry-level models have edge backlights), greater contrast and wider viewing angles. Some premium models also utilise Samsung's ingenious One Connect system, which sees all connections, including power, routed through a separate box that's then connected to the screen via a single, almost impossibly thin cable.

Samsung's 2020 QLEDs have already chalked up a fair few five-star reviews, so there's clearly lots of quality on offer. But which is right for you? Let's dig into them in a bit more detail.

As we've already mentioned, 8K TVs are a pretty niche prospect. Though considering Samsung's claims that demand last year exceeded expectations, maybe they're not as niche as you would think.

There are three main models, but multiple variants thanks to the various screen sizes on offer. The Q950TS and Q800T are the main models, while the Europe-only Q900TS is identical to the Q950TS except it doesn't have Samsung's One Connect box.

The Q800T is Samsung's most affordable 8K QLED TV yet. The 65in model is priced at £3999 ($3500, AU$5299), which is in line with Samsung's top-of-the-range 2019 4K QLED set. While not likely to garner mass appeal just yet, it should tempt more people than ever to dip their toes into the 8K waters. And that has to be a good thing for us all, as the more demand there is for 8K content, the more content producers are likely to make.

This year's 8K QLEDs are all about improving brightness, contrast and details. All three models feature a technology called Deep Learning Super Resolution, which makes upscaled content look better than ever. They also all have Samsung's Quantum Processor 2.0 8K chipset, Full Array Local Dimming, Adaptive Picture+, HDR10+, Adaptive Sound+, Object Tracking Sound+, Q-Symphony, ATSC 3.0 tuners and AI ScaleNet. Quite a feature set, making them some of the best TVs around. (For more on what these features do, read our complete guide to Samsung's 2020 TV line-up.)

So what's the difference between them? One word: design. The Q950TS (and Q900TS) has a zero-bezel 'Infinity Screen'. In other words, the border is so slim it's practically nonexistent, more akin to those found on high-end smartphones than TVs. Both TVs are under 15mm thick, too.

Apart from the OneConnect box (found on the Q95T but not the Q90T), and the fact that the Q90T comes in a 55in model as well as the 65in, these two sets are identical, so we'll cover them both in this section.

They're both Samsung's top-of-the-range 4K QLED TVs (excluding the lifestyle range, which we'll cover later), and as such offer premium specs and superb performance.

Such as? They're the only ones with Samsung's new Ultra Viewing Angle tech for improved off-axis viewing. Handy if you have a packed lounge with plenty of viewers not straight-on to the screen. They also have more local dimming zones than the cheaper 4K QLEDs, meaning a greater degree of difference between areas of light and dark in the picture.

And on the audio front, as well as the aforementioned Adaptive Sound+ and Q-Symphony, you get Object Tracking Sound (OTS) so the audio follows objects and people as they move.

The Q80T is a step down, but still one of the best 4K TVs you can buy. You get most of the same tech, including the Direct Full Array backlighting for giving great contrast even in sunny rooms, but you don't get the Ultra Viewing Angle tech. The Q80T also has fewer local dimming zones, and that means it goes slightly less bright and produces slightly less convincing blacks than the Q90T/Q95T. And it's got fewer speakers, although it does still boast Object Tracking Sound.

It also has the same processor as its more siblings, as well as Deep Learning Super Resolution, Adaptive Picture+ and Adaptive Sound+, Q-Symphony and HDR10+ compatibility.

The Q80T comes in more sizes than the pricier sets. Ranging from 49in all the way up to 85in, there's bound to be a size to suit you.

If you want a premium set but don't need all the bells and whistles of the Q95T/Q90T, the Q80T could be your best bet.

The Q70T starts at 55in in size, and like the Q80T, goes up to 85in. This is the point at which the full array, direct backlight is replaced by edge lighting, which will likely result in a less bright picture with lower contrast. You also lose the Deep Learning Super Resolution tech and Object Tracking Sounds.

Of course, the benefit of choosing the Q70T over one of the models above is a big cost saving. We've not yet reviewed this model, but Samsung's edge-lit QLEDs have proved excellent performance-per-pound propositions in the past.

Like the Q70T, it's edge-lit, and features Samsung's Dual LED tech, which uses warm and cool LED backlights to enhance contrast and colour reproduction. The difference is it lacks the Q70T's Adaptive Picture, Adaptive Voice Amplifier and AI Upscale. The Ambient Mode is slightly less advanced (being standard Ambient Mode, rather than Ambient Mode+), and there's no VRR.

And now onto Samsung's lifestyle range of QLED TVs. If you want something a bit different, then maybe one of these is for you.

The Sero is new this year. Its big selling point is that it rotates to portrait mode like a smartphone. The 43in, AirPlay 2-compatible set comes with a unique stand that lets it rotate from portrait to landscape.

The Frame is a TV within a picture frame that, combined with its arty screen savers, makes it look like a work of art when switched off. It now spans sizes from 32in to 75in, and has the same Dual LED system mentioned earlier.

Finally, the Serif is designed to look like a capital 'I', sat on top of a pedestal-style stand. It comes in 43in, 49in and 55in sizes.

We haven't reviewed any of these lifestyle sets yet, so can't say whether they're some of the best 4K TVs money can buy. But going by the rest of Samsung's range, they should be pretty great to watch.

Panasonic 2020 TVs: everything you need to know