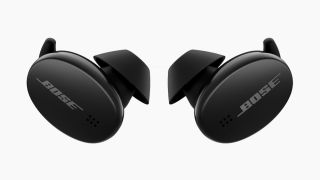 Bose, one of the biggest names in noise-cancelling tech, has announced not one but two new pairs of true wireless earbuds – the Bose Earbuds 500 and the Bose Noise Cancelling Earbuds 700. But what can expect from these premium buds? And how will they stack up against the firm's stellar headphones? Read on for what to expect from the forthcoming Bose buds.

Demand for wireless earbuds has exploded in recent times, with the likes of the AirPods, Galaxy Buds+ and Sony WF-100MXM3 offering an on-the-go headphone experience without a wire in sight.

But with plenty of cutting-edge competition on the horizon, including Samsung's Galaxy Buds Live and the rumoured Sony WF-1000MX4 (and soon, no doubt, the AirPods 3), now's a good time to take a closer look at all the official news and unofficial leaks surrounding the Bose Earbuds 500 and Noise Cancelling Earbuds 700.

The Bose Earbuds 500 were originally due for release last Christmas but were delayed due to both the coronavirus pandemic and what Bose called a "longer than anticipated" product development process.

With COVID-19 continuing to affect supply chain, it's hard to narrow down the exact date but it's a pretty good bet that Bose will want to launch both products in time for Black Friday and Christmas.

Can't wait that long to get yourself a pair of Bose in-ears? The Bose SoundSport Free buds have been given a serious price cut. See below for the best deals.

Bose has offered excellent noise-cancelling technology as long as anyone, and has built an enviable reputation on its premium designs with premium price tags, so you can be sure that its next true wireless earbuds won't come cheap.

We'd expect the SoundSport Free's successor to debut at a similar price.

The Noise Cancelling Earbuds 700 will be competing with the AirPods Pro (£200, $230, AU$350), so while Bose will likely charge a premium for its world-beating noise-cancelling tech, it'll have to stay competitive.

And with Bose closing all its bricks and mortar stores in Europe, North America, Japan and Australia at the start of the year due to changing consumer shopping habits, the company is all too aware of keeping things competitive.

The forthcoming Bose Earbuds 500 and Noise Cancelling Earbuds 700 appear to share a similar design aesthetic. As you'd expect from a company that sells itself on sound quality rather than gimmicks, the new buds opt for a classy finish, rather than anything too ground-breaking.

Bose has released images of the 500s (pictured above) and says they will be a "smaller and sleeker version" of the 2019 SoundSport Frees. The 500s also get touch-sensitive controls as well as access to Google Assistant and Amazon Alexa voice control.

The footage shows a set of pill-shaped Bose-branded earbuds, each with a flashing blue notification LED. They look pretty chunky, but we'd guess that's to accommodate the advanced noise-cancelling tech. There's also plenty of room for touch-sensitive controls, allowing you to skip tracks and summon a voice assistant with a swipe of a finger. The buds appear to have silicone tips and, says the leaker, are supplied with two other sizes of tips in the box.

The mysterious Quill doesn't explain how he came by the demo unit, but the buds certainly bear a striking resemblance to the Bose sketch.

We're big fans of the five-star Bose SoundSport Free wireless buds, which combine weighty sound and IPX4 sweat-resistance with clever features such as Find My Buds, which allows you to track down a missing bud by emitting a noise.

That being said, it's no secret that the ageing Frees now find themselves seriously outgunned by their rivals, including a host of newer and more advanced wireless buds from Apple, Sony, Samsung and others.

So, we'd expect to see some pretty major upgrades from the Bose Earbuds 500. Take battery life, for example. While the SoundSport Free return a fairly average 5-hour battery life, Bose is promising that the Earbuds 500 will 'power through the day'. That could put them on a par with the Sennheiser Momentum True Wireless 2, which last 7 hours per charge, or the Samsung Galaxy Buds+, which last 11 hours.

We also know that the 500s will feature Google Assistant and Amazon Alexa voice controls, along with "intuitive touch controls". You can also expect Bluetooth 5.0 on their spec list (the SoundSport Free make do with Bluetooth 4) and a revamped Bose Control app.

Does that mean the 700s will get the same system as the over-ears, which boasts 11 increments of noise-cancellation, allowing the wearer to transition from total silence to full transparency? Fingers crossed – it's some of the most advanced noise-cancelling tech we've ever tested.

According to that leaked video, above, the box shows a feature list as follows:

The "unboxing" video also confirms the presence of a transparency mode, which allows you to hear the outside world. We can also see what appears to be a (sizeable) wireless charging case to accommodate the hefty buds complete with their protruding earfins.

No doubt the 700s will have a fast-charge function too, a standard feature on most wireless headphones these days. For comparison, 10 minutes of charging breathes 90 minutes of life into the superb Sony WF-1000XM3 wireless buds.

We expect plenty more leaks in the lead up to the launch of the Bose Earbuds 500 and Noise Cancelling Earbuds 700, so keep eye on this page for all the news.