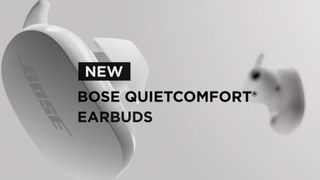 A new Bose marketing video has been leaked revealing more specs, features and a closer look a the design of its new flagship wireless earbuds.

Somewhat surprisingly, the video calls these headphones “QuietComfort Earbuds”. Strange; the company announced earlier this year it was working on not one but two new pairs of true wireless earbuds – the Bose Earbuds 500 and the Bose Noise Cancelling Earbuds 700. Looking at the video, it appears as though QuietComfort Earbuds is the new name for Noise Cancelling Earbuds 700.

The video in question was found on retailer Harvey Norman’s website by Reddit. It has since been taken down, but not before it was re-uploaded by other users, including YouTube user Matrix Life  who posted the video to their channel – and you can see it below.

Specs listed in the leaked video include six-hour battery life from the buds (they come with a case, but there's no mention of how much extra life it will provide), a custom-designed microphone array for clearer voices during phone calls, plus the company's pioneering active noise-cancellation technology. They're also going to be sweat and water-resistant and available in two colourways (black and white).

Visually, the design is not dissimilar to the five-star Bose SoundSport Free: an elliptical driver housing with eartips and fins to keep them secure – although the unit looks marginally thinner, to sit flatter against the ear. We can't see any physical buttons on the top edge of the casework (as found on the SoundSport Free) either.

A plethora of wireless headphones have been released in the wake of the Apple AirPods Pro, but few audio outfits have Bose's international clout and history – Amar Bose designed and released the first commercially-available noise reduction headset in the world, the Bose Aviation Headset, in 1989 after all. Will the new QuietComfort Earbuds topple the AirPods Pros? Only time will tell.

Like Apple's flagship products, Bose's high-end headphones rarely come cheap though: the Bose QuietComfort 35 II costs £259 ($299, AU$345) and it's unlikely that the QuietComfort Earbuds will carry anything other than a similarly premium price tag.

No pricing or release date was included in the video leak – and we should state that at the time of going to press, Bose has yet to confirm the authenticity of the video – but considering how finessed it looks, we'll probably be hearing from Bose very soon...

Should you buy Apple AirPods? Are AirPods worth it?