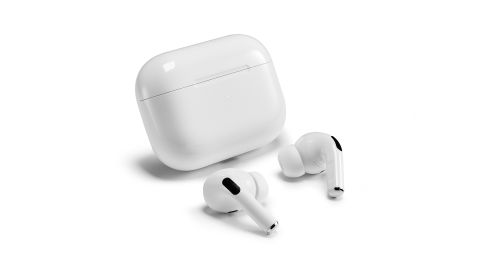 The noise-cancelling new AirPods Pro can be beaten for sound, but they are a joy to live with and use all day, every day

All of a sudden, there are new AirPods: the Apple AirPods Pro. Divisive though the original AirPods are, they have certainly been a hit. In fact, Apple claims they’re now the most popular headphones in the world.

But, despite their abundance and the rather magical user experience they offer, the AirPods Pro have their flaws. The second-generation model brought with it a boost in sound quality, but they're still a long way from delivering the sonic satisfaction of the very best wireless earbuds.

The fit is a bigger issue: one-size-fits-all might be the approach, but for some people the AirPods simply don’t fit at all. And while some appreciate the non-invasive fit, the complete lack of noise-isolation makes them ill-suited to certain scenarios.

These are all issues that Apple has sought to address with the AirPods Pro, which don’t replace, but rather sit above, the existing AirPods.

By combining the magic of the original AirPods with active noise-cancelling, Apple will be hoping it has another hit on its hands. And while the AirPods Pros aren't the best sounding noise-cancelling in-ears, they are still an utter joy to own and use.

While there’s no denying the familial similarities between the 2nd-gen AirPods and the AirPods Pro – the glossy white finish, protruding stem and bulbous body – there are clear differences, too. Most obvious is the silicone tip of the new AirPods, which is shorter in length than on many in-ear headphones and elliptical rather than round.

That main body is chunkier, too – presumably to accommodate the extra components – but the stem is shorter, making the AirPods Pros less conspicuous when worn.

Where the existing AirPods respond to taps to the body, the AirPods Pros' controls have been moved to the stems, which now contain force sensors. A quick squeeze on either stem pauses or resumes a track (or answers an incoming call), a double-squeeze skips forward, a triple-squeeze skips back and a long squeeze switches between noise-cancelling modes.

However, we’re not completely convinced by this approach. The squeezes are fiddly to perform, particularly when running or cycling. The AirPods Pro earbuds are sweat- and water-resistant, albeit to a lesser degree than sports-focused rivals, such as the Jaybird Vistas. Running in the rain is all good, but wearing them in the pool most certainly is not.

The AirPods Pros stay in our ears when running during testing. They are so light (5.4g each) and comfortable that they can give the impression of not being secure, but they refuse to budge in action. Some people may manage to shake them loose, but they are much more secure in place than the original AirPods.

Apple supplies just three pairs of tips, with two of those hidden beneath a flap at the bottom of the box. The message here is that the pre-attached, medium-sized pair should fit most, and you should only dabble with the others if there’s an issue.

You don’t even have to identify an issue yourself – click on the AirPods Pros in the Bluetooth menu of your iPhone and you’ll find, among other options, an ‘Ear Tip Fit Test’ that, when tapped, plays five seconds of music that’s analysed in order to identify any sound leakage. Get a green ‘Good Seal’ result and you’re ready to go, but if the Pros identify an issue you’ll be prompted to try a bigger or smaller tip.

This is an impressive feature, largely because the Pros don’t feel like most in-ear headphones in that they burrow into the ear canal significantly less and generally exert a lot less pressure. In short, they’re more comfortable, but that comfort can initially be mistaken for looseness.

Also contributing to the ‘barely there’ feel of the AirPods Pros is a series of vents that allows air to flow between your ear and the outside world. That might sound odd, but it reduces that pressurised feeling that you often get from noise-cancelling buds.

The biggest change here is, of course, noise-cancelling, and Apple’s implementation is typically techie. Each Pro has two microphones: one on the outside to detect incoming noise that can be cancelled out by anti-noise, and one on the inside that detects any noise that makes it through the seal and also analyses how your music is responding to the individual geometry of your ear.

What’s most impressive is that the noise-cancelling is continuously adjusted 200 times per second. Apple claims these are the only headphones to take this approach.

The good news is that the noise-cancelling is effective. Predictable, constant noises such as a train are more or less eradicated, while less predictable sounds such as office chatter are reduced to a whisper. And, as promised, there’s no sense of the air being sucked out of your ears when you engage the noise-cancelling.

Apple has ignored the trend for user-selectable noise-cancelling modes. Instead, noise-cancelling is either on or off. The exception is the ‘Transparency’ mode, which actively allows sound in from the outside world.

This is another extremely impressive feature. Many noise-cancelling headphones have a similar feature, but it often comes across as unnatural and synthetic, with some sounds amplified louder than others and the blend between external noise and your music seemingly not quite right.

Use Transparency on the AirPods Pros, though, and it’s remarkably similar to using a pair of completely non-isolating headphones, such as the original AirPods. This is again down to the vents and continuous processing, according to Apple. There seems to be a slight enhancement to midrange sounds, which helps you hear voices, but it's so subtly done that it never feels anything other than completely natural.

Powering the whole experience is the same H1 chip that's built into the second-generation AirPods. This is already renowned for enabling a flawless wireless performance and supremely quick pairing. During our tests, we experienced no drop-outs and found the automatic pairing, which instantly connects to your phone when you insert an earphone, to be predictably brilliant.

The H1 chip also enables the Pros to support Apple’s voice assistant, although Siri can also be activated by a pinch. One disappointment is that Siri is the only method for adjusting volume without reaching into your pocket for your phone's controls. Other brands have managed to squeeze volume controls into their true wireless earphones and we wish Apple would do the same.

Battery life is a claimed five hours for the earphones with another 19 hours from the charging case. The case is wider than that of the standard AirPods but also more squat, resulting in a package that’s actually not much larger in terms of volume. If the earphones run out of charge, five minutes back in the case will give you another hour of listening.

Sonically, Apple has taken the same approach with the Pros as with other products, favouring clarity and a neutral tonal balance rather than lots of weighty bass.

That said, the performance does alter slightly when noise-cancelling is switched on. Playing R.E.M.'s Belong via Tidal and switching between noise-cancelling modes, we notice that 'Off' produces a slightly tonally richer and rhythmically crisper performance. There's an extra warmth to Michael Stipe's unusually deep, spoken vocals, a little more texture to that bubbling bassline, a more engaging punch to notes and greater overall cohesion.

Even here, though, the AirPods Pros aren't quite able to match the sound quality of the Sony WF-1000XM3, which are that bit more dynamic and attacking. But the Pros counter with a more easy-going nature that ensures nothing sticks out unpleasantly – even the lowest quality Spotify streams sound acceptable.

The Pros also achieve something that few other in-ears do: they combine the directness inherent in the design with an open airiness that's far harder to achieve. That feeling of the sound being pumped directly into your brain is far less intense here and, while you're not quite fooled into thinking you're listening out loud, there is a spaciousness that allows instruments to breathe.

There's not tonnes of bass here, but that's not to say that the AirPods sound lightweight – bass is just more balanced and considered. The midrange is where the AirPods Pros really shine, though, with vocals reproduced with plenty of texture and detail. There's good sparkle to treble, too, but with no hint of brightness sneaking in.

But switch on Noise Cancellation or Transparency (which sound broadly the same except for added outside noise) and there is a small step down in sound quality. Here, there's a touch of sibilance audible in the vocals of some tracks and a slight comparative lack of tonal warmth that's most noticeable in the bass. More significantly, timing takes a bit of a hit, which manifests itself in tracks losing a bit of overall impact, possibly down to all of that on-the-fly processing when noise-cancellation is enabled.

None of this is a huge issue and shouldn't put you off using Noise Cancellation when you need to escape the noise of a plane, train or crowded office, or Transparency when you want to reduce the possibility of being run over when out for a walk. We would recommend switching both modes off when they're not strictly necessary, though.

The AirPods Pros can't quite match the best-in-class noise-cancelling true wireless headphones for sound quality, but the user experience and unprecedented levels of comfort still make them a very strong new option in the category.

And by combining that excellent noise-cancelling with a transparency mode that feels almost as natural as wearing non-isolating earphones, Apple has created a pair of headphones that’s as well suited to a long-haul flight as it is to a run around the block. For many, they could be the only pair of headphones they ever need.