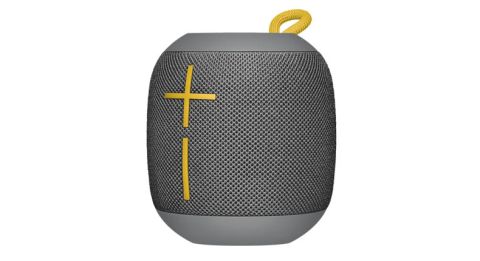 The phrase “plug and play” doesn’t really apply to wireless speakers, not least because playing via Bluetooth means there’s nothing to plug in as such.

If there were, however, the Ultimate Ears Wonderboom would certainly fit that category. It’s simple to set up, will survive being bashed around, and has great sound to boot.

The Wonderboom might be about as big as a coffee mug, but it certainly won’t break quite so easily.

Ultimate Ears says you can drop this speaker from up to 5ft without any concerns about damaging it. We tried it a few times without issue, but of course it’s probably better to take a bit more care.

And with summer fast approaching, it’s handy this speaker can be taken to the pool or beach. An IPX7 rating means it’ll survive being in water for up to 30 minutes. You don’t have to worry about losing it to the depths either – the Wonderboom floats.

It's a neat little feature that's been adopted by the newer Wonderboom 2, Boom 3 and Megaboom 3 speakers, too.

Turning the speaker on and pairing it to your device is straightforward, and Ultimate Ears claims the battery will last for up to 10 hours at 75 per cent volume.

That logo also acts as playback control, letting you pause or skip your tracks.

Apart from being remarkably robust and pairing with other Wonderbooms, there are few other bells and whistles on this speaker.

The company's iOS and Android app doesn’t operate the Wonderboom, so you’ll have to do without alarm functions or EQ adjustments.

You don’t even get a 3.5mm input, as the only physical connection on the Wonderboom is its micro-USB charging port.

We pair it with an iPhone 6S using Tidal to test out its sonic chops, and we’re pleased to hear a lot of the same characteristics of the Award-winning Roll 2 are present in the Wonderboom.

There’s a similar level of clarity in the midrange and treble, as the angry lyrics of Kanye West’s Black Skinhead are conveyed with enough expression to capture his grit.

The harsh breaths that open the song come through the Wonderboom with a surprising amount of energy and force for such a little speaker.

It has no trouble keeping up a fast pace, either. Vampire Weekend’s Diane Young bounces along happily as the Wonderboom matches the high-speed intensity of the guitar’s distorted notes and the rapid-fire snare drums.

However, the main focus of the Wonderboom is its bass. Ultimate Ears says this speaker has more of it compared to the Roll 2, and there’s certainly a greater sense of solidity in the low guitars and weighty beats in Queen of the Stone Age’s No One Knows.

The slimy riffs and aggressive, pushy drums have a good degree of weight – the Wonderboom handles the way each strum grunts forward with enough force. While it can lean a little too heavily on those low frequencies at times, it’s still a satisfying sound overall.

Higher up the frequency range, the Roll 2 enjoys a little more dynamism.

While it still gives the competition from other manufacturers a run for their money, compared to the Roll 2,the strings at the centre of The Hobbit: An Unexpected Journey soundtrack don’t quite soar and the difference between the piano’s loud and quiet trills in Old Friends is less distinct.

But those differences aren’t enough to turn us off the Wonderboom’s sound – ultimately it’s a case of ‘different strokes’.

The Roll 2 might have a superior overall sound quality, but the Wonderboom faces up to the challenges of harsher environments just that little bit better.

If you’re looking for a travelling companion you can rely upon to share your taste in music, the Wonderboom makes a compelling alternative to the Roll 2 and a more affordable choice than the Wonderboom 2.

Being portable and rugged, along with decent sound quality, ensures this speaker will be heard no matter where you are in the world. Bon voyage!