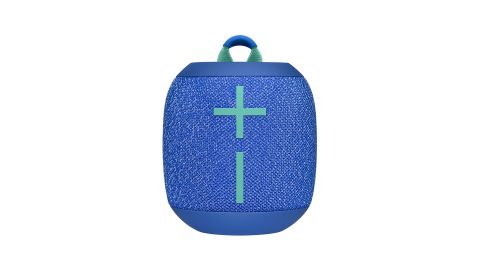 UE has taken a great, affordable Bluetooth speaker and made it even better, delivering a weightier sound and some useful new features

The Wonderboom has long been a favourite of ours, with its robustness and strong sound winning it a five-star rating on this very website.

But Ultimate Ears clearly isn't one for kicking back and relaxing. The second generation Wonderboom Bluetooth speaker - the predictably named Wonderboom 2 - has just landed, promising a whole new range of features and improved bass.

A lot has changed in a short space of time. The UE Wonderboom 2 is almost three millimetres fatter and a little taller than the original model. This is barely noticeable at a glance, but there have been plenty of alterations on the inside too. A new chipset promises crisper sound, longer battery life and, most notably, 10 per cent more bass than the original.

There’s also a new ‘boost’ button on the underside of the unit for using the Wonderboom 2 outdoors. When pressed, this restricts the bass frequencies, allowing the UE to play louder through the midrange and upwards. This is claimed to make the sound easier to hear when the unit is used outdoors.

Battery life has been increased to 13 hours, from the 10 hours of the original Wonderboom, and a full charge still takes just under three hours. Not only is the new model waterproof and designed to float, as the original was, it's also sand- and dust-proof, thanks to a full IP67 rating. Handy if the Wonderboom 2 ends up being half-buried on your picnic or beach party.

The design on the top of the speaker has also been tweaked, with a circular button where the branding used to be – press this to ‘double up’ the sound by pairing two Wonderboom 2s. This feature was available in the original version, but has been upgraded so that pressing the central button on two new speakers means they now pair in stereo mode. You can still pair old and new Wonderboom models in mono (the older one doesn’t support stereo).

The chord loop on the top is now flat and stretchy, with a rubber slider in the middle. We prefer this – as we do many of the tweaks. The Wonderboom 2 is available in red, black, blue, grey and a millennial pink, which UE calls ‘Just Peach’, but gone are the tie-dyes and wavy patterns, at least for now.

That unmistakable yellow charger has been replaced with an Apple-esque white cable but, overall, the Wonderboom 2 looks and feels more premium than the original.

There’s still no voice assistant built-in, or microphone, and in terms of ports, there’s just a micro-USB for charging purposes. As with the first model, you can’t operate the Wonderboom 2 via app. Ultimate Ears has chosen not to over-egg the portable speaker pudding, but as it’s such a winning recipe, that shouldn’t be a problem.

We cue up our iPhone 7 and listen to The Waking by Kurt Elling on Spotify Premium. The first thing to note is that the extra bass promised by UE is here, and it pays dividends in the mix. Elling’s voice is as forward as we’d expect, but thanks in part to that extra bass injection, it never dominates.

The Wonderboom 2 delivers a sound as cohesive and detailed as we could hope for at the price. The presentation takes a step forward too. There are discrete musical nuances available in the twang of the double bass that weren’t obvious with the original.

We switch to Aerosmith’s Water Song and the glass harmonica, wind gong and bullroarer instrumental at the top of the track is suitably spine-tingling, as is Janie’s gun – a strike of simultaneous drums that comes through crisply, brimming with attack. For such a small speaker, the fact that Stephen Tyler’s vocal flourishes and detailed riffs are apparent is no small achievement.

The outdoor mode is a welcome addition, making the Wonderboom 2 a viable option for the beach or picnic. It’s certainly more than a gimmick, allowing the speaker to focus on the sound frequencies you can best hear outside.

The Wonderboom 2 is every bit as precise as the original five-star model, yet it delivers a weightier sound while losing none of the core musicality.

The second-generation version offers enhanced bass on top of the the same balanced, pleasing tonality. It also offers a longer battery, increased durability, stereo pairing and an outdoor option thrown in to boot. For under a ton, this is where the wise money goes.