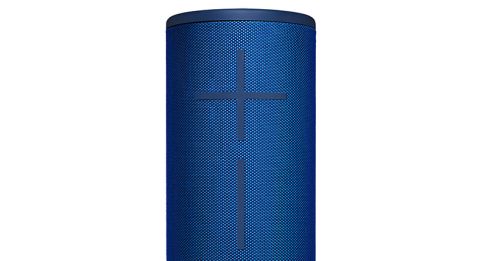 Punchy, exciting and full of fun, the Megaboom 3's design tweaks and new features make it even more exciting to use than before.

It builds on an already-excellent reputation, and design tweaks, sonic boosts and nifty new features make it even more enjoyable to use.

The portable Megaboom has always been designed for outdoors use – by the pool, at a festival, muddy camping and other adventurous activities – and so the high-density fabric protecting the latest version of the speaker has been reworked.

It’s now IP67 rated, which means it’s dustproof as well as waterproof (up to three feet of water for 30 minutes), and not only is it sturdy, it also floats. Like the petite Wonderboom, this third-gen Boom speaker can bob next to you in the pool while still playing music – just don’t leave it in for too long.

Cosmetically, the big strip that housed the giant volume buttons has been removed to the back. This allows the speakers’ 360-degree sound to be delivered more freely, and leaves a cleaner look, too.

In fact, the UE Megaboom 3 has a more sophisticated appearance overall, especially thanks to a flatter top panel and dual-tone finishes of the new fabric. You can get the Bluetooth speaker in the colours Night (black), Sunset (red), Lagoon (blue) and Ultraviolet (purple), and two Apple-exclusive colours of Denim (deep blue) and Cloud (light blue). We really like the shimmery, iridescent sheen of the new fabric surrounding the trademark cylindrical design.

The speaker itself feels chunky and indestructible as ever, but it’s still light enough to carry around in your backpack or just around the house.

One of the banes of the older Booms and Megabooms – turning it upside down to plug the charging cable in underneath – is something the company has finally changed. The charging port has been repositioned, now letting you charge the Megaboom 3 upright, as you normally would.

Alternatively, you can dock it on a Power Up charging stand. It’s a touch pricey at £34.99, but it’s quite nice to plonk the speaker on to.

The UE Megaboom 3 lasts 20 hours on a full charge – a decent amount that’s unchanged from the previous generation.

The redesigned top button - called the “Magic Button” - has learned some new tricks. You can play and pause songs with a single tap, skip tracks with a double tap, and, with a long press, summon a playlist.

That’s right, the speaker can play your favourite playlists without you having to reach for a smartphone. The Megaboom 3 doesn’t even need to be turned on; it just needs to be connected to your smartphone.

You’ll need the accompanying Ultimate Ears app to set up multiple playlists, and you can also skip through them with more long presses. It’s a nice little addition, and gives you a slightly quicker access to your music without wasting precious few seconds tapping away at your screen.

The new playlist feature is fun, but it does have limitations. Currently, if you’re an iOS user, you can only import playlists from Apple Music, while Android users will have to use Deezer. No Spotify? We’ll join you in that outcry, but Ultimate Ears says that it’s in talks with other streaming services to join in.

Other staple Ultimate Ears features such as PartyUp and Stereo can also be controlled through the free app. You can link up over 150 Megabooms (and Booms, and of any generation, so don’t throw away that first-gen Boom from 2014) for an almighty party, and you can pair up two Megaboom 3s for stereo mode. Its Bluetooth range has been increased from 30m to 45m, too.

With Megaboom 3 boasting so many features, it’s easy to forget that it’s “just” a portable Bluetooth speaker.

Thankfully, the speaker sounds just as fun, punchy and capable as we’ve come to expect from an Ultimate Ears speaker. It’s a hugely enthusiastic sound that favours excitement while still keeping an eye on balance.

The 360-degree dispersion of sound is impressive, easily filling up a room. Push it too hard and you’ll clearly hear its limit, but the sound is satisfyingly solid, has well-defined edges, a great helping of detail and a terrific sense of rhythm.

The Megaboom 3 has been given a bass boost thanks to popular demand, with Ultimate Ears enhancing its passive radiator to give deeper bass.

Sure enough, the wireless speaker sounds a lot bassier and punchier, especially compared with its stablemate, the Alexa-powered Megablast, which is now at a similar price. The Megablast sounds distinctively thinner and coarser in the treble next to the new speaker, with the Megaboom 3 filling in the lower midrange to make it a weightier, smoother listen.

Basslines are deeper, charge the song along with more momentum and grip, and that solidity runs through the entire frequency range, too. It can sound a touch thick thanks to the added bass weight - in some tracks, voices could sound cleaner - but overall the Megaboom 3 is a more enjoyable and easier listen compared with the Megablast.

At its aggressive price of £170, there really isn’t much to rival it. While the Audio Pro Addon T3 is a more nuanced, refined listen, its boxy, more domestic design will attract a completely different audience from the rugged Megaboom 3.

There’s no shortage of weatherproof portable speakers, but Ultimate Ears has carved out a niche for themselves by combining great design and fun features with an entertaining sound.

The Megaboom 3’s new playlist features, sleeker design and improved sound are definitely worth your time.