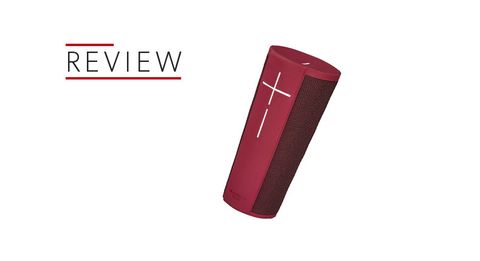 Alexa voice control is a bonus, but we love this portable speaker’s fun, energetic and admirably controlled performance most of all

The Ultimate Ears Megablast is UE's loudest and smartest speaker. With Amazon’s Alexa voice assistant built in, wi-fi connectivity as well as Bluetooth and the UE rugged build, it's quite the portable package.

More crucially, the Megablast joins the brand’s portfolio of five-star Bluetooth speakers that are simply fun to use and listen to. Good-looking and great-sounding, the Megablast is an absolute treat.

Design-wise, the Ultimate Ears Megablast is similar to the existing Megaboom speaker, albeit a touch flatter at the ends. The brand name is now prominently displayed, too.

It retains the same rugged, durable build quality that makes Ultimate Ears speakers perfect for outdoor use. It’s waterproof as well (IP67 rated), so will survive being dunked in the pool or splashed in the rain.

Battery life is a respectable 16 hours, although it’s worth noting that’s down from the non Alexa-powered Megaboom’s 20 hours.

Despite being designed for portable use, there has been a conscious effort to make the Megablast more home-friendly - due mostly to its new role as a smart speaker.

When indoors you can prop the Megablast up on an optional charging dock – the Power Up (£35) – which doubles as a neat stand.

Thanks to Alexa's integration into the Megablast, you can ask it to dim your home’s smart lights, set a cooking timer or play your favourite 80s power ballad – just as you would when using an Amazon Echo or Sonos One.

Say the wake word ‘Alexa’ and a white LED strip on top of the Megablast glows bright, then blinks when replying to you.

It’s a nice, unobtrusive way of knowing Alexa has heard you (meaning a more natural dialogue flow), and the speaker is responsive and swift to relay commands. You can also mute Alexa – indicated by a tiny red LED.

The Megablast has a bespoke control app, called Ultimate Ears, to help you set up the speaker to your home’s wi-fi for voice control.

However, if you want to fully customise Alexa’s settings (set your location, choose the metric or imperial system) and skills (such as Routines, which initiates a chain of commands through a single phrase), you’ll need to do that through the dedicated Alexa app.

Alexa’s skills become more useful the more smart elements you have in your home, but when it comes to voice-controlled music playback over wi-fi you’re restricted to Amazon Music Unlimited and TuneIn radio for now.

So if you say “Alexa, play Edge of Seventeen by Stevie Nicks”, the Megablast will only play from Music Unlimited – if you have an account.

The good news is that there is support for music streaming services such as Spotify, Deezer and Amazon Music over wi-fi. For Apple Music , Google Play Music and others, you'll need Bluetooth. There is no 3.5mm audio jack.

Staple Ultimate Ears features, such as pairing two speakers to play in tandem or stereo mode, are present as well as the party mode where you can connect up to eight. Bear in mind that you can only pair Blast and Megablast speakers with each other and not the rest of the UE family.

We fire up our Spotify playlist and are greeted by a hugely enjoyable performance.

Ultimate Ears says the Megablast is its loudest speaker yet, measuring a maximum of 93dB, 40 per cent louder than the Megaboom.

The performance says it all. The Megablast has no problem filling up our medium-sized listening room with a sound that demands your attention.

It’s not just sheer loudness that impresses us, it’s the fact the speaker manages to go so loud without sounding distorted or harsh. That's something even hi-fi stereo speakers can't manage at times.

Stevie Nicks’s vocals reach soaring highs in Edge Of Seventeen, packed with crisp detail and fervour in equal measure. There’s a big sense of space, too, helped by the speakers’ 360-degree spread of sound.

Does that loudness affect how well Alexa hears you? The Megablast has no problem hearing when playing music at a reasonable volume (about halfway through the 10-step volume level).

Any louder (beyond level seven) and we have to shout or lean closer to Alexa – which takes a couple of goes. And at full volume, you’re better off using the Megablast’s large volume buttons or your smartphone’s controls.

But we’re quite happy to shut up and simply listen to the Megablast. It has a terrifically dynamic presentation for a speaker of this type.

Ultimate Ears’ customary energetic character is plain to hear in Salt-n-Pepa/En Vogue’s Whatta Man. That funky bassline is ferociously taut and snappy through the Megablast.

It drives the song’s punchy rhythm, maintaining such an enthusiastic momentum you’ll be joining in with the catchy chorus every time.

Each note – a solid drum hit, crashing cymbal, chunky guitar strum – is handled with precision. But we’re also pleased the Megablast is enormous fun to listen to despite this level of control over its performance.

The Megablast is a bit leaner tonally than we’d expect, with its rival Sonos One smart speaker having a touch more warmth through the midrange.

Ben Folds’ heartfelt singing in the sparse Brick is more contemplative through the smooth-sounding Sonos, with the piano coming across as sweeter and more full-bodied.

It can’t match the Megablast’s level of clarity and detail, though, or its confident dynamics. That leanness is what gives Megablast its speedy and dynamic sense of rhythm, too, so we’re willing to forgive this balance.

But the Megablast takes some beating.

Ultimate Ears is on excellent form here. Alexa’s inclusion in a portable speaker is a bonus, but the Megablast’s real strength lies in its hugely enjoyable and mature performance.

Add in all the perks of its waterproof and durable build, the funky and easy to use design, and you’ll find that it’s £270 well worth spending - or £100 if you can grab it on sale.