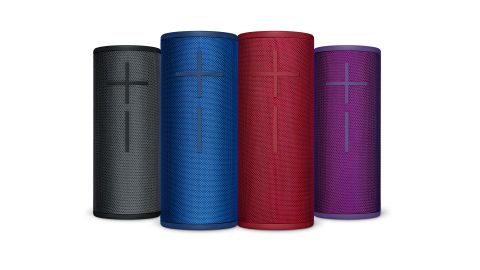 New features and revamped design make this snazzy, likeable speaker a good bet, but not a great buy

The third entry in a trilogy can go one of two ways: the Back to the Future III route where it captures the heart of the original, while offering something new; or The Matrix Revolutions, which… didn’t.

This third generation Ultimate Ears Boom speaker sits somewhere in the middle. The Boom 3 isn’t quite the resounding success of its previous iterations (and the new Megaboom 3), but it has been put together far more cleverly and neatly than any of the Matrix sequels.

If there’s another Bluetooth speaker that combines style and ruggedness so confidently, we’ve yet to see it. Ultimate Ears has managed to refine its superb cylindrical, super-tough design even further in the Boom 3.

The IP67 rating means it is dustproof and waterproof (up to 1m in water for 30 minutes), and the high-density fabric has been reworked to make it fairly indestructible, no matter how extreme the environment.

It’s a sturdy piece of kit, but still compact and light enough to throw in your bag when you go camping or on a trip. And it floats – so you can have it bobbing alongside you in the pool while blasting out tunes.

The design looks more sophisticated than before. The long strip housing the trademark volume buttons has been moved to the back of the speaker, giving the Boom 3 a cleaner look and letting the 360-degree sound spread out a bit more freely.

The top panel is flatter and has a new multi-function ‘Magic Button’ that, along with the power and Bluetooth pairing buttons, are much easier to press than before.

The charging port is now sensibly housed under a waterproof door at the back of the speaker (instead of the underside, which made positioning awkward if you had a cable plugged in), meaning it can now stand upright while charging. Like its previous iteration, the Boom 3 will last for 15 hours on a single charge.

Ultimate Ears has some new tricks too. Tapping the Magic Button lets you pause, play and skip tracks, while a long-press summons playlists imported from a music streaming service. That playlist feature is currently restricted to Apple Music on iOS devices and Deezer Premium on Androids, but Ultimate Ears is hoping to add more streaming services soon.

You can add and queue up your favourite playlists from those streaming services on the revamped Boom app, long-press the top button to play them and cycle through to the next list of tunes. It may sound like a gimmick, but it’s surprising how quickly this nifty feature becomes second nature to use. It beats multiple swiping to get the right playlist on your music app.

The tidy new Boom app lets you link two Boom 3s for stereo sound. Or, if you want even bigger sound, you can daisychain over 150 Boom and Megaboom speakers (current and previous generations) for one heck of a party.

And last but not least, the Bluetooth range for the Boom 3 has been increased to 45 metres, up from a previous 30m.

With all these changes, it puzzles us that Ultimate Ears hasn’t made any improvements to the sound quality. The company states that the Boom 3’s performance is unchanged from that of the brilliant Boom 2. We loved the Boom 2, but rivals have caught up and standards have been raised in the three years since we reviewed it.

We start streaming from Apple Music and are surprised by just how exuberant and loud this little speaker can go. We’re barely halfway up the volume level and the Boom 3 is pumping out room-filling sound with verve and punch.

The Boom 3 has the same bold, dynamic character as its predecessor, with pop hits and grungy rock anthems blaring out with plenty of detail, confidence and fun. The timing is precise, and tracks charge along merrily with a good amount of drive and attitude. The Boom 3 does a solid job of getting to the core of a song and it’s a likeable listen overall.

But where big brother Megaboom 3’s plumper bass evens out the tonal balance and gives a bit more heft to the lower-midrange, the Boom 3’s leaner character makes it sound rather top-heavy. It never goes uncomfortably sharp or bright, but it could do with greater richness and solidity to make it an easier sound to listen to.

The prominent bass notes in Fat Larry’s Band’s Act Like You Know are speedy and taut, but we’d like them to have more depth and texture. And while voices are clearly delivered, they lack a touch of natural warmth.

With the new Megaboom 3 offering a more satisfying, full-bodied listen for an extra £40, it’s an easy recommendation over the Boom 3. Their features are identical, and there’s not that much between them in terms of size. There’s also a fleet of rival Audio Pro speakers that are a clear step up in performance, although none of them match the Boom 3’s durable, all-weather design.

The Boom 3 is a fun speaker with an ultra-portable design and loud, punchy sound that will appeal to many, but Ultimate Ears appears to have rested on its laurels while its rivals are nipping at its heels. Let’s hope the next generation marks a proper advance.