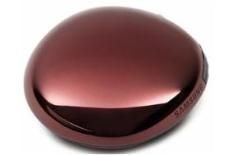 If you’re after a PC alternative to the ubiquitous iPod Shuffle, don’t look any further than this

Doesn't look like much in the photo, does it? Samsung's dinky YP-S2 (or ‘pebble', to use the company's horribly twee nickname) looks more like a Christmas bauble than an MP3 player of high regard – and high regard is what it's been held in around here ever since its First Test in our Awards 2008 issue.

Ranked up alongside some nominal competitors, the YP-S2 (let's agree now that there will be no more of
this ‘pebble' nonsense) only reinforces what a thoroughly grown-up and well-realised product it is.

Fortunately, Samsung's wayward designers have managed to rein in the worst of their excesses this time.

The lack of a display is undoubtedly an irritant (the YP-S2 may have only 1GB of memory, but that equates to more songs than you'd like to forward through in order to find the tune you're interested in), but with controls being restricted to just the basic stop/go, forwards/backwards, volume up/down, there's no opportunity to fit a maddening touch-panel or something.

Modest dimensions, startling sound
The YP-S2's dimensions and memory may be modest, it may countenance only MP3 and WMA files, and the supplied ‘pendant' headphones may be little short of an insult, but when playing through some acceptable 'phones (Sennheiser's splendid CX300s are yours for less than £20 if you shop around) the little Samsung is capable of startling sound.

It motors through Lee Dorsey's Get Out of My Life, Woman with alacrity, giving the necessarily compressed file admirable breathing space.

Low frequencies are solid and well-defined, the character-packed vocal carries its nuances intact, and there's sparkle without harshness at the top end.

Timing is good, so the whole song hangs together seamlessly, and there's a degree of drive and attack on show that's quite beyond the similarly priced and sized Philips SA2820.

A switch to the more pastoral delights of Robyn Hitchcock's Queen Elvis allows the Samsung to demonstrate its subtlety and finesse – no other MP3 player of this price or this size has anything like the YP-S2's manoeuvrability or deftness of touch.

All of this good work can be undone quite easily by ramping up the volume a little – the Samsung is willing to go loud, but there's too much top-end clamour introduced to make it a particularly good idea.

No, far better to keep the volume at a sensible level and enjoy the unlikely musicality of a product that doesn't even look like an MP3 player.

Which isn't to say that it looks anything like a pebble, you understand.