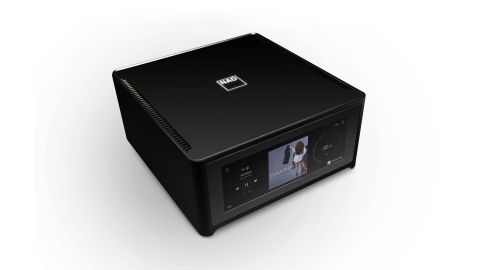 A likeable all-in-one streamer with plenty of features, but it falls just short of matching the best in class for sound

It takes some bravery to look at a three-time What Hi-Fi? Award-winner and think ‘that’s there for the taking’, but NAD is a company of rare resource, technological nous and audio accomplishment.

If anyone can defeat the mighty Naim Uniti Atom, it’s NAD – a company that has embraced digital music more than any other traditional hi-fi brand. It is part of the BluOS ecosystem, so can produce products with streaming and multi-room baked into their core.

The NAD Masters M10 is a compact, just-add-speakers streaming system in a box. A complete, next-gen hi-fi that’s as happy partnering your TV as it is a wireless speaker in your bathroom. A rival to the Uniti Atom that might just have the chops to emerge victorious…

The NAD Master M10 is similar in dimensions to its Naim rival. It’s a compact unit, 10cm tall and 26cm wide, and can be housed almost anywhere – although it’s advisable to make sure it’s facing the listening position as much as possible, so that you can take full advantage of the excellent display.

That TFT screen takes up the majority of the front panel and has the resolution and colour balance to display album artwork and combine that with big, bold text that’s easy to read from across the room. Should you choose to interact with it directly (there’s no need to touch the M10, once installed), the screen is responsive and the touchscreen volume dial’s audible click makes it quite tactile.

It’s a bigger and more useful screen than that of the Naim Uniti Atom, but in terms of its general build, the Atom is streets ahead. The NAD’s casework is rather insubstantial and doesn’t match the expectations set by a product at this sort of money. Still, you will rarely need to touch the device, and from across the room, the clear screen looks smart.

Given that the Masters M10 can be operated without touching the device itself, you might assume that it comes with a smart remote. Alas, that’s not the case: the NAD relies entirely on app operation.

For some, that could be off-putting, but the NAD Masters M10 is part of the BluOS ecosystem and so boasts a better, more widely supported and more reliable app than most. AirPlay 2 integration means that the M10 also appears as a destination device in the iOS apps of streaming services such as Tidal and Qobuz (Spotify Connect is also on board). If you still want a traditional remote control, you can teach the unit to respond to specific commands sent by a universal remote.

BluOS also brings with it the opportunity for the M10 to form part of a multi-room system comprising a mix of NAD, Bluesound and Dali devices, and ensures direct access to more music services than you’re likely to need, from Tidal, Qobuz and Spotify, to Deezer and Amazon Music (including Amazon Music HD). Roon is also supported, as are a number of smart home standards, and you can access music stored on computers and NAS devices on your own network.

High-resolution audio streams up to 32-bit/192kHz are supported, and formats including MQA, FLAC, WAV and AIFF are on board. It is possible to listen to DSD files, too, but only when converted via the BluOS desktop app.

Once you get the M10 home, simply connect a pair of speakers to start listening, although you can also use the integrated Dirac room equalisation software and bundled microphone to calibrate the sonic performance to your room. It is worth going through the process and deciding whether the calibrated or ‘raw’ delivery suits you best.

But just because the Masters M10 can be treated as an all-in-one player doesn’t mean it has to. Thanks to its abundant connections, it can also form the hub of a complete system There are two pairs of stereo analogue inputs for a CD player or turntable (there’s no integrated phono stage), coaxial and optical digital connections, and even an HDMI socket with full eARC (Enhanced Audio Return Channel) support so that your TV can be hooked up.

There’s ethernet for wired networking, plus a pair of pre-outs and two subwoofer outputs, below which sit two pairs of standard speaker terminals. Our only disappointments on the connections front are that the single USB socket is on the rear (a more accessible one on the front or side might be nice) and the lack of a headphone socket.

NAD addresses the latter with two-way aptX HD Bluetooth (you can send music from the NAD to your Bluetooth headphones as well as send music to it from your portable device), but those with a cherished pair of wired headphones will be disappointed.

At the heart of the system is NAD’s HybridDigital amplification, which is designed to deliver more accurate, distortion-free and dynamic sound. NAD conservatively rates power at 100W, but claims that dynamic power can reach 160W into 8 ohms or 300W into 4 ohms. In other words, there should be lots of headroom for epic dynamic shifts.

We kick off with Childish Gambino’s incendiary This Is America and are pleased with what we hear from the NAD. It works well in terms of tone, with no part of the frequency range sticking out or drowning out another. The threatening bass is lusciously deep and dramatic, the high hat-like synth is nicely controlled. Vocals emerge clearly even when the soundstage gets busy.

We notice some muddling during the busy sections, though, and while it may at first seem as if that’s the track’s intention, a switch to the Naim Uniti Atom proves that this is actually a carefully coordinated construction by rhythmically placing each sound more accurately and giving everything more space to breathe in a broader, deeper soundstage. The NAD sounds pleasant, likeable and fluid, but the Naim simply tightens everything up.

Switching to The First Big Weekend by Arab Strap, the NAD proves to be a detailed performer, digging up the creak of the seat right at the start of the track and every intake of breath in the spoken vocal. There’s lots of solid punch to the kick drum, too, particularly once the volume is cranked over halfway.

When the high-hat is added and the tempo increases, the NAD struggles a touch to keep up. It sounds as though it’s chasing the track rather than driving it. Though the vocal is still fairly clear and focused, the NAD becomes a bit muddled again, losing track of the individual strands in play.

We change pace with the stripped-back folk version of Here’s The Tender Coming by The Unthanks. The NAD doesn’t have a large ensemble to worry about and the performance delivered is detailed, smooth and clean. Listened to in isolation, it is hard to fault – especially considering the all-in-one nature of the device.

But again, the Naim takes things further by revelling in the low-level dynamics in the vocals and gentle instrumental accompaniment. The NAD’s delivery drifts over you, while the Naim’s is more sorrowful, entrancing and poignant.

Features-wise, the NAD Masters M10 is pretty much on the money, with an excellent streaming platform and all the connections required to neatly perform the role of both hi-fi and TV sound system. It sounds good; tonally balanced, clear, clean, weighty and smooth.

But it’s up against the Naim Uniti Atom, which offers a more dynamic and better-organised delivery that’s simply more engaging to listen to. We like the NAD Masters M10, but it’s up against a truly exceptional benchmark and it can’t quite match the Naim.