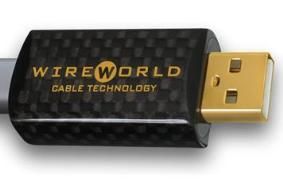 Due on sale in January, the new models are the Silver Starlight, which starts at £249 for a 1m length, and Platinum Starlight, at £499 for a metre. Both cables will be available in lengths of up to 10m.

'Another special feature of the cables is a power conductor that is fully isolated from the signal conductors to preserve signal purity.'

WireWorld founder David Salz says that 'When I first began testing [them] a few years ago, I was surprised by how easy it was to hear the sonic differences between various USB cables.

'Of course, a direct connection between the computer and DAC sounded much cleaner and more lifelike than any of the cables, so I proceeded to develop cables that approached that level of sonic purity.

'I am confident that the uniquely lifelike sound quality of these new cables will be well received.'