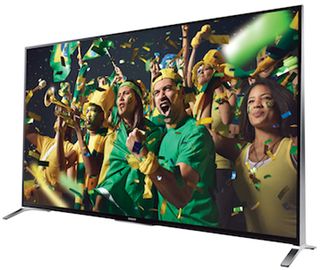 Brazil winning last summer’s FIFA Confederations Cup on home soil was by no means groundbreaking. Football fans of all generations – both young and old – have seen the Brazilians lift a trophy at some point.

But something that was groundbreaking about the event was news that 4K broadcast trials had been carried out and been a success.

As a result of those successful tests, sports fans are now being promised a “richer and more exciting viewing experience” with football's world governing body FIFA and Sony bringing the 2014 World Cup Final to us in Ultra HD – though quite how we will be able to see it remains to be seen.

In a development that could be considered related, it seems that FIFA has decreed that all competing teams at the World Cup this summer wear monochrome kits.

That means it will be all-white for England, all-blue for Italy and all-red for Spain, among others (hosts Brazil have reportedly rejected the idea and retained their traditional yellow and blue attire). Germany ditched their traditional black shorts for white ones, too.

And the reason why, according to reports, is to improve the quality of HD pictures being shown around the globe from the event. A further example of football dancing to TV's tune?

One theory behind the move is that TV cameras won't have such a varied spectrum of colours to pick up from a multi-coloured kit – like the dazzling efforts of World Cups of yesteryear.

Therefore, a simpler signal can be transmitted via the broadcast feed and not consume a huge amount of bandwidth in the process of doing so.

The biggest shop window in the world

Even if you don’t agree with those who argue that the football World Cup is unrivalled in terms of its size and international stature (compared with, say, the Olympic Games), it's still a fantastic stage on which 4K TV has the chance to shine.

After all, KantarSport data reported 909.6 million people watched the 2010 World Cup Final in their homes. And that doesn't include the number of people watching "out-of-home".

With all the continuing discussion surrounding the availability of 4K content depending on where you are in the world, the use of an international sports event to showcase the technology is an ideal chance to reach all corners of the world. Not only that, but Japan has brought forward its first 4K TV broadcasts to coincide with the event in July.

It could also be the catalyst to prove to UK broadcasters like the BBC and Sky – maybe even BT Sport too – that demand for live 4K broadcasting on these shores exists and is worth following up with, even if it is just sports broadcasting for the time being. We have carried out the trials, so the next step is surely making it real and marketable.

Live sport does seem to be a great testing tool for new TV technologies. After all, who wasn’t intrigued when you could watch 3D football in pubs across the UK?

It may not have convinced everyone (me included), but sport does reach out to us like few other genres. The viewing data for the 2010 World Cup (above) supports that claim.

It doesn’t matter if your money is on Brazil, Germany, Spain, or even England, it’s going to be interesting to see whether 4K emerges as a World Cup winner this summer.

MORE: How to watch the World Cup on TV, online, on demand, highlights