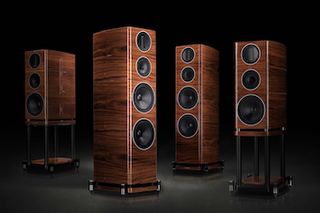 We've waited a long time for the release of Wharfedale's new flagship speaker range. It was teased at the Bristol Hi-Fi Show nigh on a year ago.

The best things come to those who wait, though. Wharfedale's new flagship range is the culmination of a special three-year R&D project, after all. And, in Greek mythology, the Elysian Fields are a heavenly place where the heroic and virtuous are rewarded in the afterlife – sounds like something worth waiting for.

Both speakers were actually developed concurrently with the EVO4 Series (the excellent Wharfedale Evo 4.4 floorstanders are current What Hi-Fi? Award-winners), which launched towards the end of 2019. In Wharfedale’s product hierarchy though, Elysian now tops the bill.

Like the EVO4, the speakers in the range are three-way designs, sporting an unusual driver array, including an Air Motion Transformer (AMT). With Elysian, Wharfedale says each component – the drivers, the crossover, the cabinet – was engineered and developed to the highest standards without cost constraint, to push the performance of the entire project.

The development of an AMT unit was a key part of the Elysian/EVO4 project, and Wharfedale says the Elysian AMT is larger and of a higher specification than the one used in the EVO4 Series. It features an ultra-lightweight diaphragm material and an acoustically damped rear chamber.

In the spirit of Gilbert Briggs, Wharfedale's founder (well known for experimenting with new driver materials), the firm investigated a range of options to match the sensitivity and accuracy of the AMT treble unit for the Elysian's midrange driver, eventually settling on a proprietary woven glass fibre matrix, formed into a 150mm cone. This boasts both low mass and high strength and promises to deliver realistic voices and instruments.

The 220mm glass fibre matrix bass cones – one in the Elysian 2, two in the Elysian 4 – are apparently capable of reaching down below 28Hz. Said bass units are used with an advanced version of Wharfedale’s signature slot-loaded port, christened SLPP (Slot-Loaded Profiled Port).

Both Elysian models have a relatively wide stature, with each just over 43cm deep. One key aspect is the wide baffle, finished with radiused edges to help smooth the flow of sonic energy around the cabinet.

As an adjective, elysian means blissful, so we can't wait to see (and hear) if Wharfedale's new range can deliver...

What Hi-Fi?'s Best of the Week: 7th February

ISE 2020: all the news and highlights

Standmounts vs floorstanders: which speakers should you buy?