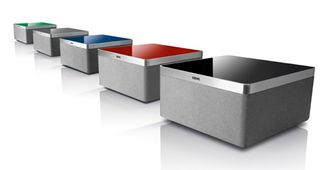 Loewe has officially cut the price of its AirPlay AirSpeaker from £649 to £499 with immediate effect.

That brings it more into line with the likes of the B&W Zeppelin Air and (non-AirPlay) JBL OnBeat Extreme, both at £500, and well under the £600 B&O Beolit 12.

The AirSpeaker is available with a range of different finishes for the top plate, which can be removed and replaced. We'll be testing the AirSpeaker soon.

Loewe has introduced two stylish sound systems for Apple iPod/iPad/iPhone users - the AirPlay-supporting wireless AirSpeaker (pictured below) and the dock-toting SoundBox (above).

The AirSpeaker also features a USB socket that allows you to connect an iPod dock, should you want to enjoy audio non-wirelessly.

Loewe claims the AirSpeaker – which features distinct pairs of tweeters, midrange and bass drivers – will offer "incredible sound and design quality". It will come in a range of high-gloss colour options.

Arriving in shops a little earlier, priced at a highly competitive £449, is the Loewe SoundBox. As well as Apple docking, the SoundBox offers CD playback and an FM radio, plus bedroom-friendly clock and alarm functionality.

We hope to review both products when they become available – and will bring you more details as they emerge.