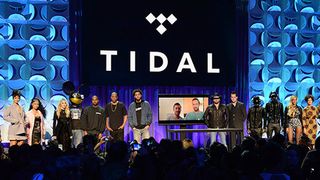 Tidal is back in the headlines for all the wrong reasons with the news that a criminal investigation is under way over allegations of inflated streaming numbers.

Tidal was accused of manipulating streaming numbers last year, an allegation it promptly denied, and it has now been confirmed that the Norwegian National Authority for Investigation and Prosecution of Economic and Environmental Crime (Økokrim) is investigating the scandal for potential data fraud.

The story began last May, when Norwegian newspaper Dagens Næringsliv alleged that Tidal had not only been inflating its subscriber numbers, but also manipulating its listener numbers by hundreds of millions. This had reportedly led to "massive royalty payments at the expense of other artists".

Last year, Tidal CEO, Richard Sanders, moved to quickly quash the rumours and pointed to a potential data leak, saying in a statement at the time: "We reject and deny the claims... we feel it is important to make sure that our artists, employees and subscribers know that we are not taking the security and integrity of our data lightly."

However, the allegations haven't gone away. The same newspaper now reports official confirmation that an investigation is under way - and has been since last autumn.

The central allegation is that some 320 million fake plays were credited to Beyoncé and Kanye West, leading to inflated pay outs for those artists. This was reportedly uncovered by the newspaper following an investigation. Tidal continues to deny any wrongdoing, and there's no suggestion of any wrongdoing by any of the artists.

A Tidal statement, says: "Tidal is not a suspect in the underlying investigation. We are communicating with Økokrim. We are aware that at least one person we suspected of theft has been questioned. We cannot comment further at this time and refer to our previous statement, which still stands."

Now it seems the Norwegian authorities will have the final say - with some potentially very serious punishments for any wrongdoing.

Tidal launched after Jay-Z's acquisition of Scandinavian streaming service, WiMP. It brought with it lossless and subsequently hi-res audio streams, with the company recently announcing it now offers more than 1 million hi-res tracks. Tidal reportedly reached 3 million subscribers back in 2016 - a decent level of growth but still a long way behind Spotify, who reported 83 million subscribers in June 2018. Naturally if any of these allegations stick, it won't bode well for the future of Tidal...

Which is the best streaming service?