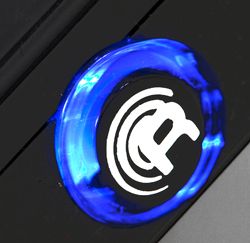 ThinkFlood, the US-based manufacturer of the RedEye and RedEye mini remote controls, is expanding its range to allow your iPod Touch, iPhone or iPad to control your whole home, including heating, lighting and security systems.

It's also revamped its original RedEye and RedEye mini systems, giving users more choice of how they control their devices.

The new RedEye Pro (£649) is part of the second generation of systems from the Massachusetts-based company, and will work with iOS devices and personal computers to give 'whole house' control.

That means multiple rooms can be controlled, and also integrates RedEye control with equipment such as lighting, heating and security systems, which can be 'driven' from a single button on the iPhone, iPad or PC.

And thanks to input from leading custom installation professionals at the design stage, the unit also offers extensive customisation tools including web-based access, meaning that established dedicated whole-house remote-control handsets can be replaced with much more affordable iOS devices or PCs.

There's also new dedicated app for the RedEye mini, which uses a miniature infrared emitter unit plugged into the headphone port of an iPhone, iPod Touch or iPad.

Users can now choose between the main RedEye app, which will control an entire system, or a simpler version designed to drive smaller systems of just a few components.

The company says that while the original app – now available in v2.0.1 and a dedicated iPad version – offers the greatest flexibility, the RedEye mini app will suit 'casual users who are unfamiliar with activity-based control or those who prefer a more basic device-based universal remote'.

ThinkFlood products are distributed in the UK by Armour Home.