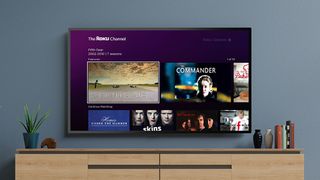 Roku has today launched its free, ad-supported TV streaming channel in the UK.

The Roku Channel, which debuted in the US in 2017, offers free access to thousands of movies and TV episodes to anyone with a Roku streamer or Roku-based TV. Thanks to a partnership with Sky, the channel is also launching on Now TV devices and Sky Q boxes.

The channel requires no subscriptions, fees or even logins, but it is supported by adverts. Users should expect eight minutes of ads per hour of viewing, while a cap ensures the same ad doesn’t appear more than once every half an hour.

So what’s available? In the UK, users can watch over 10,000 movies and TV episodes, from Hollywood blockbusters such as The Wicker Man and Les Miserables to popular British TV series including Homes Under the Hammer, Skins and Fifth Gear. There is also a special ‘Kids & Family’ section for handpicked, child-friendly content, which is subject to a reduced ad load.

Movies will come to the catalogue on a month-per-month basis while TV shows will tend to hang around for longer. In addition to 'featured' and 'recommended' suggestions and a search tool, editorial collections by Roku exist to point users to what content is leaving soon and what is new.

The Roku Channel in the UK features over 40 content partners, including Hollywood studios such as Lionsgate and Sony Pictures Television. More publishers are expected to be added over time.

The news comes a week after Roku announced an update to its UK streaming players' OS that brings wider voice control support onboard as well as a reduction in device boot time and faster launch times for a number of the platform’s channels.

Best streaming trials and deals 2020: where to watch TV and movies for free