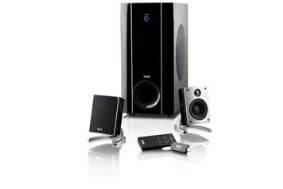 The Concept C 300 Wireless package comes with a wireless integrated soundcard and USB wireless transmitter, enabling stereo sound to be beamed from your computer to the speakers.

The powerhouse of the set-up is the CC 300 SW subwoofer, which functions as the bass speaker, stereo amplifier and wireless audio receiver in one unit. It uses a large, side-firing 25cm bass driver in the 40-litre wood enclosure.

Inside the subwoofer are three amps, one delivering 140W to the bass driver, the other two delivering 30W to each of the satellite speakers.

You also get a stereo wired input for owners who want to connect two devices; it can be used to hook up iPods, games consoles, TVs or a second computer.

Teufel's Concept C 300 Wireless package is available now for £259 from the Teufel website.