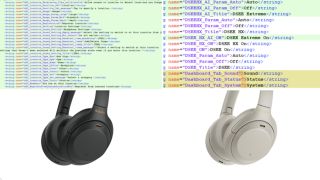 In the past few months, we've seen many Sony WH-1000XM4 headphones leaks regarding their alleged manual, pricing and design. In fact, the rumour mill surrounding Sony's forthcoming update to the Award-winning WH-1000XM3 noise-cancelling cans has proved so active that we compiled a dedicated Sony WH-1000XM4 release date and rumours page to list everything known about them.

And, thanks to the latest leak, we might know something the WH-1000XM4s will be able to do that the WH-1000XM3s cannot.

Code spotted during a recent teardown of Sony’s Headphones Connect app, posted by Twitter user justplayinghard (below), allegedly reveals the WH-1000XM4s' ability to simultaneously connect to two devices. This feature is not supported by its predecessor.

Sony WH-1000XM4 Info from Headphone Connect 7.0.1Looks identical to the XM3.It'll be able to change some (if not all) headphone settings based on your location (set locations or your own) and uses Google Maps API for it.New DSSE Extreme (also on X1ii), probably AI Upscaling pic.twitter.com/7hpGMIE7BbMay 21, 2020

The WH-1000XM4s could also boast something called 'Smart Talking', a voice-detection feature that could automatically engage ambient sound once a voice is detected, and after a set time audio will return to normal. The Sony WH-1000XM3 has Ambient Sound Mode, which lets you hear ambient sound without having to remove the cans, but this new tech could mean the headphones deploy the function automatically.

What didn't emerge from the dismantling of Sony's Headphones Connect app was an official release date for the new model, and there's been no official word from Sony on when we can expect to be able to purchase them, either.