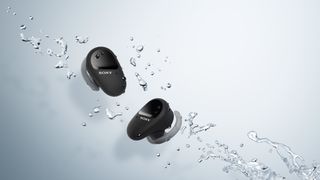 With lockdowns continuing all around the world, outdoor exercise has never been more important. If you're looking for a new pair of sports headphones to accompany your runs or walks, the Sony WF-SP800N could be an option.

They're true wireless earbuds, so there are no cables to get tangled up in. And they're rated IP55 splash- and dust-resistant, so will handle runs in the rain or a windswept dirt track without breaking a sweat.

Speaking of sweat, that won't trouble them either. You can even rinse them off under the tap after each workout.

They go the distance, too. Battery life is 9 hours from the earbuds, with the battery case providing the same again, giving 18 hours in total. And that's with the active noise-cancellation switched on. Turn it off, and that battery life jumps to 26 hours (13hrs + 13hrs).

In a rush? Just 10 minutes of charge time will give you an hour of music playback, which should be enough for most people heading out for a quick burst of exercise.

As well as noise-cancellation, you get Ambient Sound mode, which lets you dictate how much background noise to let in, Sony's Extra Bass feature which emphasises, er, bass, and the Headphones Connect app which lets you tailor the sound to your preferences.

They also support Sony 360 Reality Audio technology to deliver a more immersive listen, but you'll have to use a compatible music streaming service to hear the difference. And there's a feature called Advanced Adaptive Sound Control, which detects what you're doing and adjusts the ambient sound settings accordingly.

Sony has also announced its recently launched WF-XB700 earbuds are now available across Europe for €150/£120.