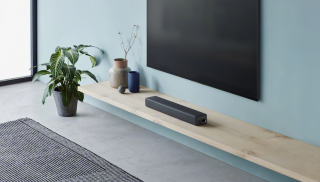 Sony has unveiled a compact newsoundbar, the HT-SF200, as its latest way of improving on your television's sound.

The small soundbar - which is about half a metre long - is a 2.1-channel design with built-in subwoofer. It includes Sony's S-Force PRO Front Surround technology, which the company claims will create "the effect of being surrounded by speakers - without wires trailing around the room".

It has Bluetooth connectivity for wirelessly streaming music, as well as HDMI ARC and optical ports (for linking it to your television) and a USB socket. If you own a Sony television, you'll be able to control the soundbar with the same remote.

Available in charcoal black or crème white, the HT-SF200 will be priced at £200 and will be available from late February. Or early March.