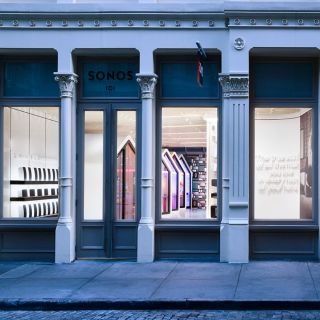 The store is at 101 Greene Street, among the likes of Jimmy Choo, Christian Dior and Louis Vuitton, and is being described as “a sort of record shop for audiophiles”. The aesthetics of the store follow Sonos’ recognisable black and silver colour scheme from its speakers and the walls are designed to look like a speaker grille.

Inside the store there are seven listening rooms, six along the wall on the main floor and one downstairs, called “the legacy audio” room. The legacy audio room features a “wall of sound” comprising 297 Sonos speakers, eight of which are functioning.

MORE: Sonos - Everything you need to know

Each of the six listening rooms upstairs are 10’ x 12’ and feature different furniture and layouts to resemble different rooms in the home. Customers will be able to listen to songs from every major streaming service or play vinyl records through a Sonos Connect or Connect:Amp.

Speaker set-ups will vary in configuration and comprise the Play:1, Play:3, Play:5, Playbar and Sub, to cater for music and home cinema uses.

MORE: Which Sonos speaker is right for you? Play:1 vs Play:3 vs Play:5

Dmitri Siegel, Sonos Vice President said of the store: “When I lived in New York, you could stop in off the street into Other music or into Rock & Soul, Bleecker Street Records, any of these record stores and just listen to music and meet other music people.”

“That’s kind of disappearing from the city and it would be a dream come true to me if this store became like that. I hope that it’s casual enough for people to feel comfortable coming in”.

“And certainly it’s going to sound amazing in here”.

The Sonos SoHo store will officially open at 12 noon on Tuesday July 19th but so far there’s no plans to open any other stores.

You can read more about the rooms and Sonos' reasons for opening the store on the company's blog.