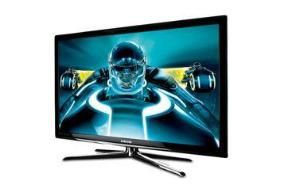 The Samsung ads will be shown during the Champions League semi-final on ITV1 on April 28th, the day after the 3D sets go on sale.

In the TV campaign, created by the ad agency CHI, a city grinds to a halt as giant Samsung 3D TV screens "blur the boundaries of reality".

The ad took eight months to produce, required 81 crew members, and used 1256 TV sets to create effects including a three-storey-high cat and what appears to be South America's Iguazu Falls plunging into a city centre.

It was masterminded by Samsung's marketing director, Mikah Martin-Cruz, the man behind the famous 'paint' and 'Play-Doh' commercials for Sony's Bravia TV range.

"The campaign really captures the spirit of 3D TV and brings to life the amazing experience the technology can deliver," says Martin-Cruz.

To be in with a chance of winning the first Samsung 3D TV, enter our competition.

Read our exclusive review of the Samsung UE40C7000 3D TV

Or watch the video review