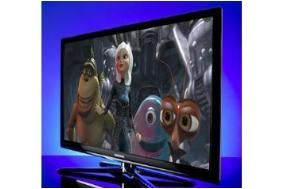 But at a technical briefing in London yesterday Simon Lee, Samsung's R&D chief, admitted "we may have exaggerated the dangers of watching our 3D TVs.

"The warnings were produced by a different department within Samsung and I think they may be a little too scary," says Lee. "We are looking at modifying the warning labels as they do sound rather serious. But as a manufacturer we must always act responsibly when introducing new technology."

Lee also admitted he'd prefer to see a single, industry-wide standard for 3D glasses. At the moment, each manufacturer produces its own 3D glasses, which are not necessarily compatible with other makes of TV. (Bizarrely, although Samsung and Panasonic's glasses are incompatible, if you wear them upside down with the rival brand's TV, they work.)

"Sooner or later we hope that there'll be a single standard for 3D glasses, and if it does happen the prices of 3D glasses will drop."

At the technical seminar, Samsung also revealed two new designs for its own 3D glasses: one for children (following in Sony's wake) and a USB rechargeable pair. The rechargeable glasses take two hours for a full charge, and should then last for 24 hours of continuing viewing.

The standard battery-powered ones are good for 50 hours use.

"Our 2D-to-3D conversion system isn't perfect yet, or as good as real 3D, but with so little 3D software available at the moment we wanted a way to do it," says Lee.

Samsung also confirmed it may introduce smaller 32in and 37in 3D TV screens later this year. The smallest 3D set it currently produces is 40in.