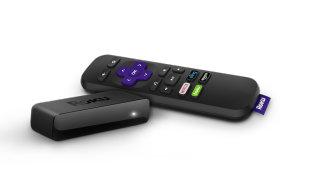 The fourth major contender in the streaming-stick arena, alongside Google's Chromecast, Amazon's Fire TV Stick and Apple TV (which, strictly speaking, isn't a stick), Roku has announced a line-up of five new streaming players to excite HDMI ports across the country.

First are two little HD streamers, the Express (pictured above) and the Express+, which are priced at $30 and $40 respectively. These are the cheapest ways to get into Roku's content-streaming ecosystem, with the Express+ designed for older televisions due to its HDMI and composite A/V ports.

Roku say these are five times more powerful than their predecessors, which should mean slicker menus and faster loading speeds.

Next come a couple of streaming sticks, aptly named the Roku Streaming Stick ($50, pictured above) and Roku Streaming Stick+ ($60). They feature quad-core processors and dual-band wifi alongside voice control and volume buttons to allow you to adjust the sound of your television.

Finally, at the top of the range is the new $100 Roku Ultra with 4K Ultra HD and HDR picture up to 60fps. That makes it cheaper than Apple's alternative - but not Amazon's.

In terms of features, there's an ethernet port for wired connectivity as well as a microSD slot for your own media.

You also get a headphone jack (in case you want to watch TV without disturbing others) and a remote finder button in case you lose the remote.

(It's probably down the side of the sofa).

Roku has also released a new version of its operating system, Roku OS 8, which is supported on all the new devices. The major change concerns the way the operating system allows searches for programmes - it shows both streaming results and live TV for a particular programme on the same page.

You'll be able to tell the difference because the streaming version will have a purple asterisk next to it, and clicking on it will take you to the respective page within the streaming service.

The line-up is set to be released on the October 8th in the United States, and we'll update you when we know about UK pricing and availability.

Introducing the new-look What Hi-Fi? Awards 2017