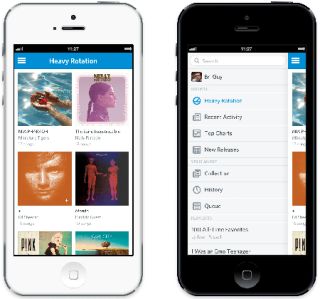 Rdio has launched redesigned and upgraded versions of its Android and iOS mobile apps.

The music streaming service rival to Spotify, which was created by the founders of Skype, now has a new look and feel and a series of new features.

In line with the desktop and web apps, the new mobile apps have a white, minimal design, with a new side-bar navigation that brings quick access to your music, playlists and other settings.

You can now pick up where your music left off on one device on a new device, so if you're in the middle of listening to Rdio on your laptop you can switch to your phone as you walk out the door.

Rdio has also fixed scrolling through music, allowing 'infinite scroll' through the library of content rather than giving a limited amount of tunes.

The new Who To Follow feature is also live with a selection of recommended accounts for people to follow based on their listening history.

The Rdio library hit 18 million available tracks back in August, while last month it announced it would be paying artists to introduce fans to Rdio.

Rdio is available to try for free but you will need to sign-up to the premium account for £10/month in order to get mobile functionality and use the app. Head to the iTunes Store or Google Play to download the free Rdio app.

Check out our Rdio review and video.