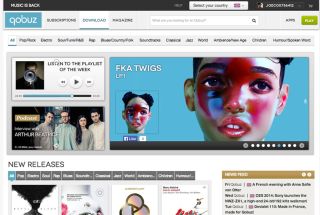 "You won't find MP3 files here!" is the claim from Qobuz, which now offers thousands of singles and albums in CD-quality and above, alongside its streaming music service (the first such service to deliver CD-quality FLAC files).

The new Qobuz downloads store - which launched in the company's native France and is now available in the UK and various other European countries - offers all tracks at a minimum 16-bit/44.1 kHz (lossless CD-quality), while many 'Studio Masters', delivered as 24-bit/192kHz high-resolution audio files. A quick look on the Qobuz site seems to indicate that there are the best part of 20,000 albums available in high-resolution formats.

Qobuz has beaten HD Tracks to the punch by launching in the UK, with the HD Tracks UK launch that was promised soon after CES yet to materialize.

In an effort to counter some of the accusations around HD music download sites, Qobuz has also made clear it will only be selling bona fide high-res files: "The albums sold by Qobuz in 'Qobuz Studio Master' quality are supplied to us directly by the labels. They are not re-encoded from SACDs and as such we guarantee their pedigree. We refuse to accept suspect offerings simply to enlarge our offering."

Album prices seem to vary from around £10 to £15 for high-res releases, with a few quid discount on the CD-quality downloads. The CD-quality, 'Qobuz Hi-Fi' music subscription service remains at £19.99 per month, or £9.99 per month for the 'Qobuz Premium', 320kbps MP3 version.

The best news? If you are already using the Qobuz music service, some members appear to be receiving a 50 per cent discount voucher via email to use on the new download store, so check your inbox...