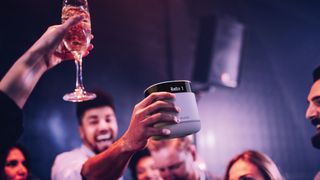 The new StreamR, released today (and hot on the heels of the new Sonos One with Google Assistant, which debuts in the US this week), is aimed lower down the market, costing £170 compared to the £230 DiscovR.

The new StreamR is only a few millimetres smaller than its older sibling - it's 8cm when 'closed' (the speaker grows when it's playing music) and 10.5cm 'open'.

The StreamR features a different driver set-up, too, with a 6cm driver and 2cm tweeter, but it offers a similar 15 hours of wireless playing time from a full charge. You'll also get the same 360 degree sound, too.

Using the Pure Home app, you can connect your StreamR to Alexa, using the speaker's built-in microphone to ask her, say, what the weather might do later.

With that all-important questioning in mind, Pure has also announced a smaller StreamR Splash, which features a 20-hour battery life and a IP67 waterproof and dustproof rating. It's set to retail for £120 when it becomes available later this year.

Both new speakers in the StreamR range include DAB+ radio, Bluetooth, four presets, an LCD display and a choice of charcoal or stone grey finishes.