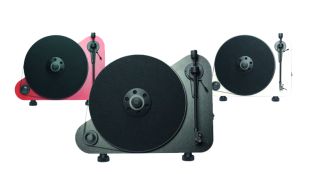 Pro-Ject's VT-E created quite a stir when it was unveiled as a concept back at CES 2016, but it's only now been officially launched as a bona fide product that you can go out and actually buy.

And, it's sure to be a talking point should you decide to pay £229 and slip one into your own hi-fi system.

It's a plug 'n play design, available in left- and right-handed versions and can be positioned upright on a desk using the supplied back support, or wall-mounted using the brackets that come in the box.

The turntable features manual speed change (33 and 45rpm) and a pre-set counterweight for Ortofon OM cartridges. There's no need to add your own though, as it comes with an aluminium tonearm and Ortofon OM5e cartridge fitted as standard.

Just in case you were worried about your vinyl flying off and rolling out through your front door, the VT-E comes with its own record clamp to your records secure.

Pro-Ject also plans to introduce a Bluetooth version, the VT-E BT, which comes with its own phono preamp and Bluetooth transmitter, although this is earmarked for launch later in the year.

The Pro-Ject VT-E is available in three different finishes: white, red and black. Until the end of June it will only be available through select retailers, but from July onwards the turntable will be sold through Pro-Ject's entire authorised dealer network.