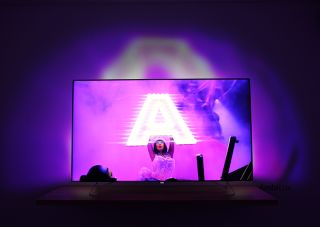 Philips couldn’t care less about 3D and is planning to beat LG at its own OLED game - that's the surprisingly forthright verdict from the launch of the company's 2016 TV line-up.

“We all know what OLED is good at. The right blacks, the right brights. It doesn’t have a problem with halos. OLED is also good in motion. The sharpness is better. The motion is better," said Tack.

The strengths of OLED are well documented, but so are the associated costs. It was only recently that buying OLED became a viable option, and Philips intends to take advantage of this.

“OLED’s price is coming down," said Tack. "When you look a year back it was three times the price of an expensive, premium LED TV. Sooner or later, OLED will grab the top of the market, and HDR is one of the drivers. If we do not adapt now, we will have to do it in a year or two when others have jumped on that wagon.”

MORE: What is HDR TV?

What about LG? It dominates the OLED sector, and Philips will need to do a lot to beat LG at its own game. The first move is to use LG’s own tech, but improve it.

Tack continued: “It’s no secret that the panels we’re using are from LG. There are hardly any other suppliers. Ours will be the same price as LG’s – it would be stupid to go lower in price – but we will be putting our own picture processing on top of LG panels. The price will be roughly the same, but we will give people a better experience.”

As for curved versus flat screens, it’s an easy question for Tack.

“We are considering only flat ones. As a brand, we are not a fan of curves; there are so many deformations in the picture. Flat is the right display format to give you the best picture quality. We were considering having one or two curved propositions in the range, but the market is declining and there is no reason to continue.”

Philips is currently focusing on a 55in model for the European market. Availability? Tack wouldn’t say anything besides “come to IFA”. September 2016 it is, then.

Elsewhere, it’s bad news if you’re a fan of 3D TV, because none of the 2016 range will have it. Philips has officially given up on the technology.

“3D is dead,” says Tack. “There are no 3D sources and nobody really wants 3D. It also complicates your TV a lot. The consumer need is simply not there. Even LG has announced it’s not doing 3D anymore. Can you imagine? LG who invested so much in their patterned retarder. We are depending on them for panels. There is no good reason to keep on pushing 3D to those guys – we follow them.”

Yet another nail in the 3D coffin, then...

MORE: Philips 2016 TVs - everything you need to know