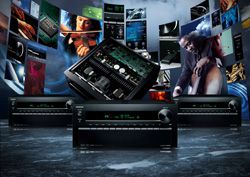 The three new products follow in the footsteps of the four previously announced AV receivers, starting at £300.

All three receivers have THX Ultra2 Plus certification, the new Cisco Linksys SimpleTap feature – more on that later – and a whopping eight HDMI inputs.

You'll also find an MHL (mobile high-definition link) HDMI connection on the front of the amps for connecting a smartphone or tablet.

Audyssey MultEQ XT32 room equalisation is on board and you can take advantage of DTS Neo:X, Audyssey DSX and Dolby Pro Logic IIz sound processing.

Mutiroom operation has been upgraded by allowing Zone2 HDMI connectivity and allowing powered audio in up to three zones simultaneously.

Also a first is the addition of Cisco's SimpleTap technology. Nobuaki Okuda, president, Onkyo Sound & Vision Corporation, said: "SimpleTap really simplifies how our new 2012 AV receivers can be connected to the network, so people can instantly enjoy their favorite tunes from music streaming services such as Spotify Premium, and many other Internet Radio services."

The app gives you full control of your devices and in turn music in multiple zones from a computer or smartphone. You can see more on SimpleTap in this video by Cisco.

The flagship TX-NR5010 has a massive toroidal transformer supported by two discrete transformers for audio and video processing, plus gold-plated audio terminals and speaker posts.

Like its slightly more powerful sibling, the TX-NR3010 also boasts multiple transformers for A/V processing, but features a heavy-duty EI transformer in place of the TX-NR5010's toroidal type.

As well as the HDMI inputs, you'll find a PC input, optical and coaxial digital audio inputs, two USB ports in the front and rear to accommodate the UWF-1 Wireless LAN adapter and UBT-1 Bluetooth aptX USB adapter, which are both sold separately.

All three new Onkyo AV receivers are due on sale in August, with prices as follows:

You can read more about Onkyo's plans for 2012 in our blog from our visit to the HQ in Japan earlier this year.