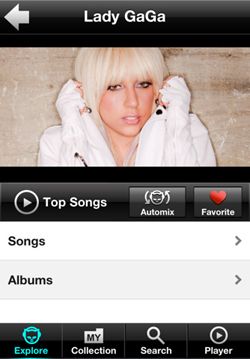 The new service gives users instant access to the full Napster catalogue of more than 15 million songs through their mobile device.

For £10 a month, Napster is now available on mobile devices including iPhone, iPod Touch, iPad and Android.

Napster Unlimited Plus Mobile combines mobile music streaming with the ability to save music to play offline, in the same way as rivals such as Spotify.

Subscribers will also have access to Napster's other features such as playlists, radio stations and recommendations from the Napster music team.

• Unlimited mobile streaming over both wi-fi and 2.5/3G.

• Offline mobile access to the last 100 played tracks and saved playlists, albums and artists so music is always available even without a mobile connection

• Web-based access from any computer, without having to download any software
• Automatic synchronisation of playlists on PC, web, mobile and integrated audio devices, with instant and automatic update of changes

The mobile app is available now in the the Apple App Store and Android Market.