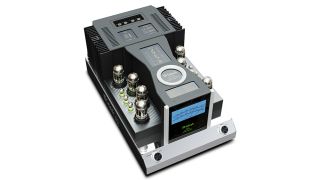 McIntosh is known for its high-end amplifiers, and they don't come much more high-end than its latest one. The dual mono MC901 combines a valve amp and a solid-state amp in one, and is being pitched by the US brand as "the ultimate solution for bi-amping high-performance loudspeakers."

The 300-watt valve amplifier works alongside a 600-watt solid-state amplifier in one unified chassis, with the former designed to drive a loudspeaker's mid and upper drive units using eight KT88 output tubes, four 12AT7 and two 12AX7A signal tubes. The solid-state section delivers its power directly to bass drivers.

It should play nice with almost any speaker because the valve amp section uses McIntosh's Unity Coupled Circuit output transformer (which the company was founded on in 1949) to deliver its 300 watts to speakers regardless of their impedance. Meanwhile, the solid-state section uses McIntosh's Autoformer tech to provide the full 600 watts.

Both sections are designed to work together and have been engineered to ensure that they amplify only their intended frequencies. Each has its own separate power supply so won't impact on the performance of the other, too.

The performance can be adjusted using its crossover controls on the top, selecting relative gains for each section from -6dB to +3dB. A direct feed is also attached to each section, allowing the bypassing of filters.

McIntosh has a long heritage making both amplifier types, of course. It's been producing valve amps since the 1940s and solid-state amps since the 1960s. It looks like the MC901 is putting that 70 years of knowledge to good use, then.