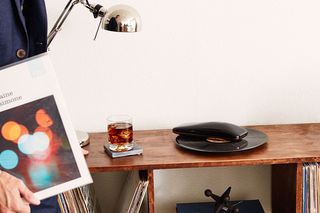 Love looks like a turntable unlike any other. It promises to be "the world's first intelligent turntable" - its major selling point is that you can control it from your phone.

Just like a standard deck it plays vinyl using a stylus. But it takes a decidedly minimalist approach - the unit consists of a base and the section containing the stylus. And that's it.

It connects to your phone over Bluetooth and Wi-Fi. So, without leaving the comfort of your chair, you can use the app to play, skip songs, repeat them, alter the rpm speed, adjust the volume and display the cover art.

It can also connect to any Bluetooth-enabled device, from speakers to headphones, so you can stream your vinyl music wirelessly. It comes with a Bluetooth adapter and a 3.5mm RCA output.

Of course, what the sound quality will be like remains to be seen. But it's certainly an interesting idea that promises some intriguing new features for vinyl, such as remote-controlled skipping of tracks. Yes, you can use the app to change track.

How? Place a record on the deck and the turntable will scan it to find out how many tracks it contains. Once done, you could skip to track three, say, by pressing the top shell three times or just selectting track three on the app. That's the theory, at least.

MORE: You can play vinyl with the new £5 note but probably shouldn't

It's powered by a rechargeable lithium-ion battery, much like a smartphone, so you can recharge it via USB. So it's portable, too.

The device seeks to combine the authenticity of vinyl with the convenience of connected tech. Though some would argue the whole appeal of vinyl is that it's a bit more basic.

If you're interested, you can sign up to be notified when it goes on sale in a few weeks. You'll also save up to 50 per cent on the launch price, though there's no word on what that will be...