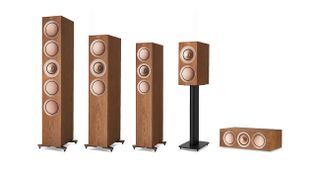 As KEF puts it, the only thing to remain the same [over the last-gen R Series range] is the name. In fact, some poor KEF engineer can claim that 1043 individual changes have been made for the new R Series, a list of which you can find below… just kidding!

In brief, the R Series range comprises the latest version of its hallmark Uni-Q driver, which places the tweeter in the acoustic centre of the midrange cone.

For one, the narrow gap between the drivers, which can be excited by sound waves at certain frequencies, has been dampened to eliminate resonances there.

As well as also implementing a redesigned motor, KEF has worked to enhance the driver’s role as a waveguide by implementing a ‘Shadow Flare’ trim ring aimed at reducing diffractions from the edges of the speakers. With the ring in place, the tweeter no longer has line of sight of the cabinet edges, creating a ‘shadow region’ at the points where the potential for diffraction is highest.

Also in the name of improved performance, the bass drivers feature an enhanced motor and new structure in which a shallow concave aluminium skin sits atop a paper cone in a two-part structure. They are smaller too, allowing the cabinets to be slimmer.

The R Series borrows the internal bracing system (which KEF is calling 'Constrained Layer Damping') from its LS50 to limit vibrations. It essentially attaches internal braces to the cabinet panels via a ‘lossy’ interface as opposed to being rigidly fixed.

Using computational dynamics, KEF claims to have improved the effectiveness of each speaker’s port, while new patent-pending micro fibre grilles have been designed to further limit sound impediment while offering driver protection.

Available from November, the R Series speakers come in a choice of black or white gloss and walnut.

New KEF Q Series aim to be better than ever