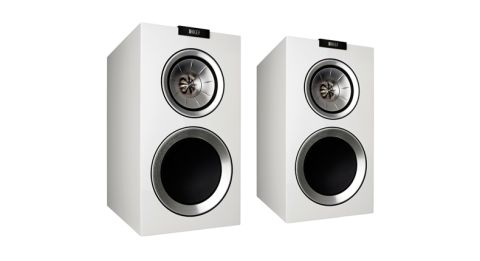 A combination of style and performance make these large standmounters a desirable buy, if you can house them

There are many pros to choosing standmounters over floorstanders. The most obvious is their practical size.

But if you’re looking for compact speakers to tuck discreetly into your room, these KEFs might not immediately be for you.

Relatively tall (39cm) and deep (35cm), the three-way R300s are on the large side. Unsurprisingly, they are the biggest standmounts in KEF’s R range.

If size is immaterial, however, these smart, sleek boxes are nothing if not desirable ­– not least for their striking white or black gloss finishes, though walnut and rosewood veneers are also available for a more traditional look.

The trademark Uni-Q driver might look like a single driver, but is in fact a 25mm aluminium-dome tweeter sat in the centre of a 12.5cm magnesium/aluminium alloy midrange driver.

The idea behind the configuration is to help with driver integration and improve sound dispersion. The tweeter’s waveguide helps with the latter too, while the mid-driver’s surround smooths the tweeter’s transition to the baffle for less distortion.

That leaves the 16.5mm aluminium woofer below to purely worry about the low frequencies.

The R300s are the sort of speaker you can plug in and everything just works. They aren’t the liveliest of listens ­though.

You get the feeling they’re playing it a bit safe at times and may be a little reserved for some people’s liking. Rhythmically though, they are naturals: fast, agile and punctual with a great balance and precise, cultured feel.

The ample soundstage justifies their large stature. They don’t feel hard-pushed in big crescendos of the Jurassic Park Theme by John Williams. Their broad dynamic sweep and astute insight ensures the track sounds as dramatic as it should.

Spaciousness is paramount in such involved instrumentals and it’s very much on the menu here.

We admire the KEFs openness when they’re placed out in a room, but balance and imaging don’t go too topsy-turvy when they’re backed up nearer a wall.

Treble shines and bells glisten amongst the wrath of strings and French horns. The bass is plentiful and has good extension, but never tyrannises. If anything, it feels a little lagging behind the rest of the frequency range.

Given slightly better cohesion, a dose of the ProAc Studio 118s or Neats Motive SX3s’ zest for life and a pinch of the ATC SCM11s’ subtlety, the KEF R300s would be at the top of the pile. As it goes, they’re pretty close anyway.

Ultimately, the sheer quality of their main rivals costs the R300s a star, but be in no doubt, when it comes to sound and build you get a lot for your money. If you have the room, give them a whirl.

See all our KEF news and reviews