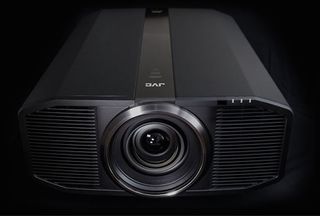 JVC's new 4K projector, which it hinted at last month and revealed at IFA, will be available to buy in December for a not-inconsiderable £30,000.

By way of contrast with the machine's 43kg bulk, the DLA-Z1 is fitted with JVC's smallest-ever native 4K D-ILA chip - it's just 16mm across and features a pixel gap reduced by 31% over JVC's previous best.

The laser light-source is claimed to be good for 20,000 hours. As images are laser- rather than lamp-derived, JVC says there will be no drop-off in performance during the life of the light-source, and the technology means light output can be dynamically controlled. No mechanical shuttering in the darkest scenes for this JVC.

The DLA-Z1 has two HDMI inputs, both supporting the HDCP2.2 standard, and is compatible with JVC's RF 3D glasses and peripheries.

And, from a brief demonstration using Ultra HD 4K Blu-ray as a source (and, of course, scaling it from the disc's native 3840 x 2160), the JVC certainly appears unstretched, delivering natural, nuanced images from its position on the floor.

Of course, once production samples become available at the end of the year we'll be lobbying JVC hard for a review sample. Although at £30,000 it's questionable how many the company will have to go around.