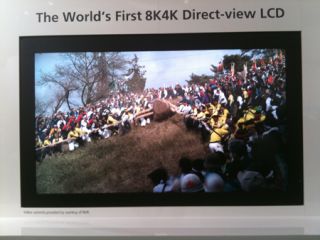 You'll have to wait a few years before this tech makes its way into your living room, but for now Sharp is working with Japanese broadcaster NHK on the technology.

This latest prototype screen is a further development of Sharp's earlier 4K2K display., which delivered a 'mere' 8.8 million pixels.

The BBC plans to trial Super Hi-Vision at the 2012 Olympics in London, as we reported earlier.