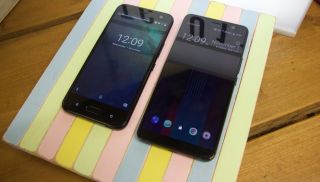 The HTC U11 was an interesting phone - a five-star product, certainly, but stand-out because of its squeezable sides you could map to take pictures, zoom into maps, or...anything, really.

(HTC say that, "unlike some people [it is] enabling you to map that to anything, rather than force you to use it for something else" - the company is, perhaps, alluding to Samsung's Bixby button).

And now there are two new varieties of the device for those that want a little bit more power, or a little less cost, from the phone: the U11 Life and the U11 Plus.

What that money gets you is a phone with two 16MP cameras (one on the front and one on the back) and that's capable of 4K video recording. It has a 5.2in 1080p screen with an 16:9 ratio, and a 2600mAh battery. It's also water-resistant to an IP67 rating, in case you want to take some underwater snaps.

Powering it is the Android Oreo operating system, and HTC has said this is also an Android One device - which means Google, which recently acquired HTC's smartphone division, has optimised the phone (although HTC are clear it isn't going to discuss the companies' relationship in any great detail).

On the sound side, the Life supports Bluetooth 5.0 for wireless audio, 24bit hi-res audio and the company's "USonic" mapping and noise-cancellation tech that maps your inner-ear to tailor the audio to your hearing. This comes at the loss of the headphone jack which, at this point, really isn't unexpected.

For a bigger upgrade, there's the U11 Plus. This has a 6in 2880 x 1440 resolution screen with an 18:9 aspect ratio in a bezel-less design, and while it won't come with HDR support at launch HTC says it'll get it by the end of the year.

By default, squeezing its sides brings up Google Assistant but, much like the first U11, this phone also comes with Amazon's Alexa voice assistant (as found on the Amazon Echo) as well as the HTC Sense Companion built in. Because if one voice assistant is smart, three must be even smarter!

The camera on its back is 12MP, while the front-facing camera is 8MP with a "selfie panorama" mode that will let you capture more - for those that enjoy large-group selfies.

On the sonic side it has the same specs as the Life, but with added support for aptX HD and LDAC (a compression codec used by Sony it claims is more efficient than regular Bluetooth).

It also has an "Edge Launcher" which, since this phone is quite large, brings up a menu on the right or left for easy-to-access apps.